I hope you are well and have enjoyed the weekend. Yesterday I played with the Lots of Happy Card Kit again and my aim was to come up with different designs that can be made with the kit without having to add extra products. I explained on Saturday that I wanted to promote our all-inclusive cardmaking kits to non-crafters as a way to help them fill some of their time during the lockdown. 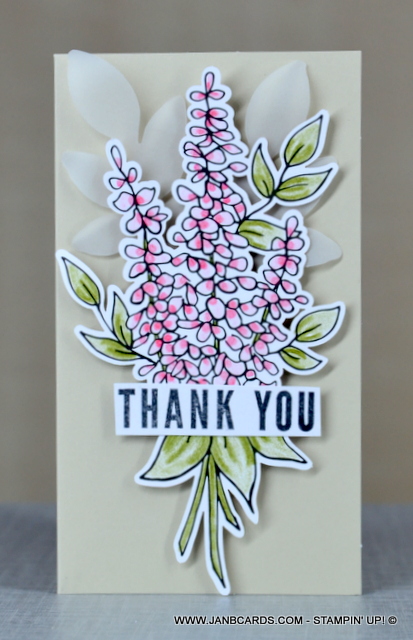 I am showing the cards in the same order I shared them on Saturday. It wasn’t easy to come up with ideas that were massively different but I have re-designed two of the cards for the better – in my modest opinion! LOL! The first card is the second to smallest with two bunches of flowers. I love the images and I love colouring them but I think the images are too big for such a small card. 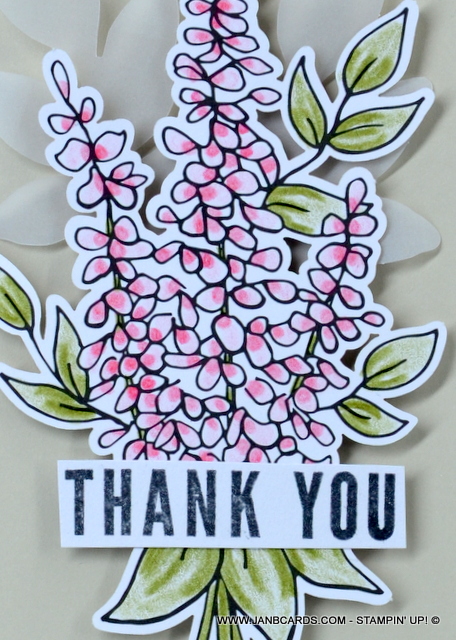 My re-design uses just one bunch of flowers, and two vellum leaves die-cuts. I omitted the background paper and the ribbon and I trimmed the sentiment down to just THANK YOU. This exercise has shown me I prefer to use our Watercolour Pencils purely as colouring pencils. I’m not a fan of water colouring at the best of times and I’m much happier using our pencils to achieve depth and shading. 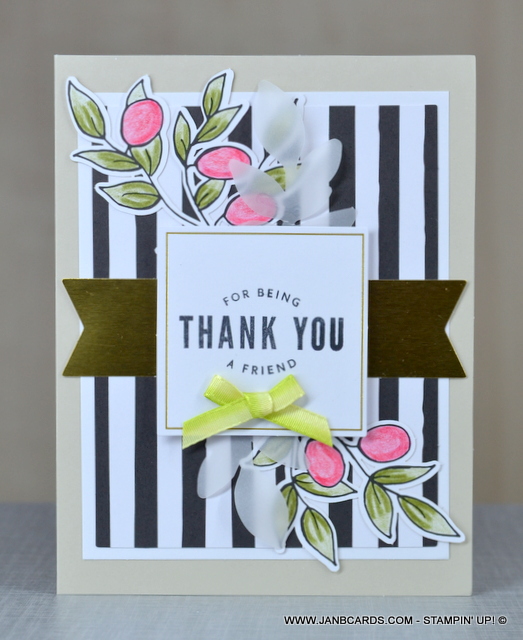 The second card is the fruit card and the first change I made was to make it portrait rather than landscape. I cut the image in half and fussy cut around the base of each which gave me some blank cardstock that I used for stamping and fussy cutting flowers for another of these five cards. I adhered the white cardstock layer and then the black and white stripe layer. I adhered each section of the image in corresponding places in opposite corners. 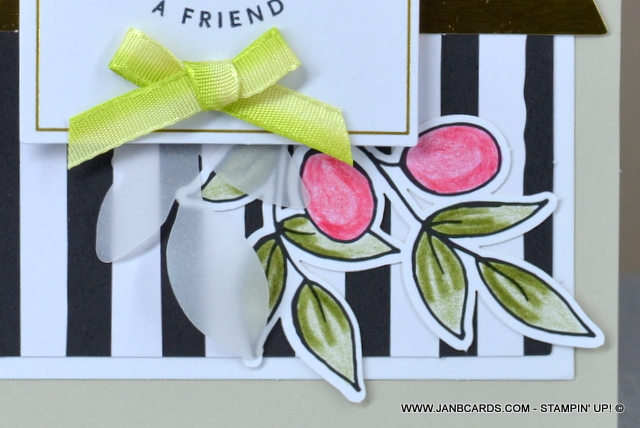 I added a thick gold banner which I also cut in half so I could make it go from side to side – unfortunately, I forgot to add some ribbon! Today I will revisit this card to see if I can remedy this omission. I’m not sure that I’ll be adding a piece of ribbon because I’ve already added a bow. Watch this space! I prefer my re-design to the original because the gold banner fills what I see as empty spaces on the original design. 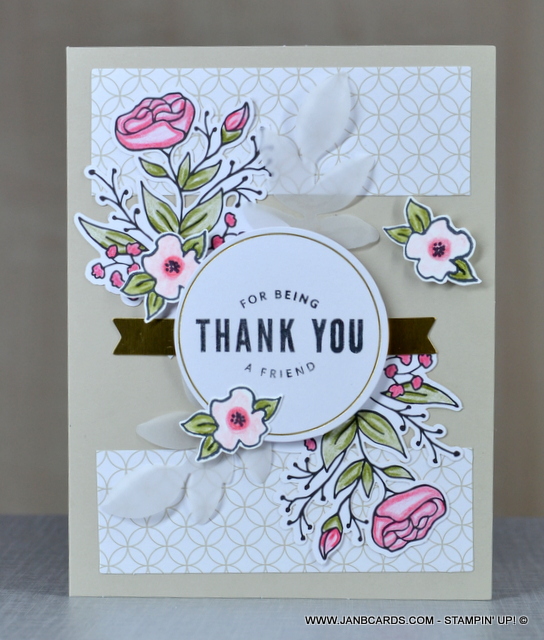 The third card is my favourite re-design! I started by cutting the background layer in two and adhering one piece near the top and one near the bottom. This is another image I cut in half but unlike the previous card, I left the spare cardstock attached to the image. I also changed the sentiment but stayed with the circle. Instead of using the narrow black and white strip, I used a narrow gold banner which I cut in half. 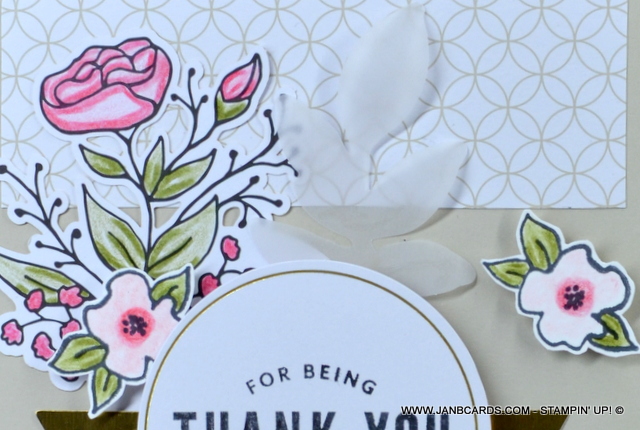 When I adhered the image halves in position part of the circle cardstock could be seen above and below the sentiment. To disguise this I stamped, coloured and fussy cut three flowers from the single flower stamp in the stamp set that comes in the kit – two were adhered strategically and the third one off to the side to balance the first two. Like the other four cards, this would be enhanced if I could add some rhinestones, pearls or my Wink of Stella! 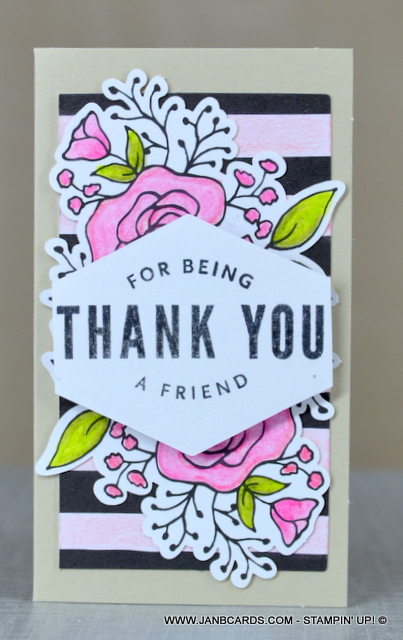 The fourth card is very dinky and would be a great card to pop in a gift that was being posted to the recipient. I thought this card was a bit crowded and hid too much of the image. I turned the card to portrait and coloured the white stripes on the background paper Flirty Flamingo. The sentiment card had to be cut to fit and it was easy to cut off the ends straight. I’d smudged some black ink on the front of the sentiment card and had to use the reverse, therefore, no gold lines! 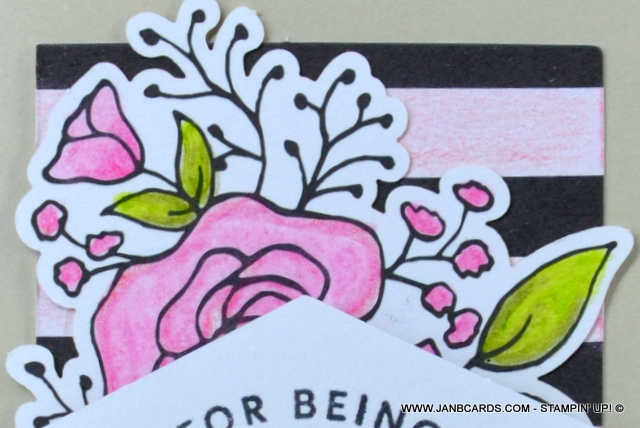 The two main reasons why more of the image is exposed on my card is partly because I turned the card around and I left off the gold banner – this was the banner I used on the third card. The fifth card is the hexagon, and I knew when I was working on the original card, I needed to turn it around because I like to be able to stand my cards up!

The white patterned image has been designed to fit the way I did the first card. It has a white band going across the centre that doesn’t have any design printed on it. This has been left like this because it should have a wide gold banner adhered on it! The white band is visible – just! – above and below the sentiment. The lower part isn’t an issue because it’s so small it isn’t noticeable, but it is at the top. 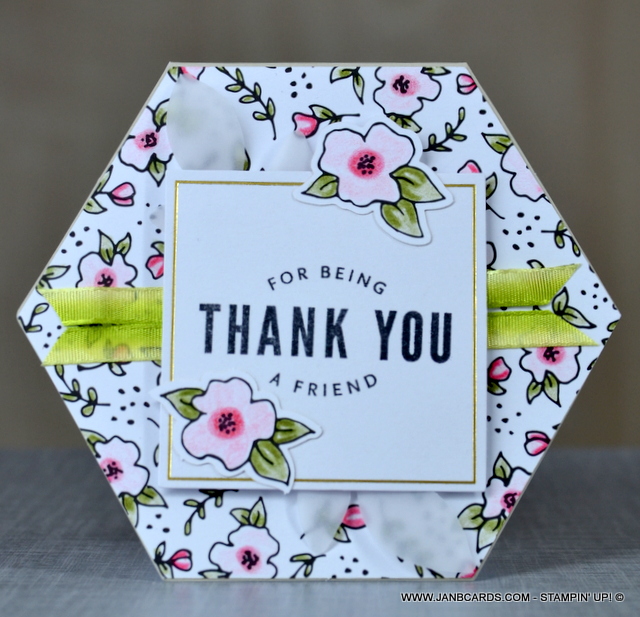 I decided I’d cover it up with the two single die-cut flowers provided for this card. The idea worked brilliantly and I’m really pleased with the result. I omitted the wide gold banner – which I used on the second card – but I did use the ribbon. I love this all-inclusive kit and had a new one delivered last week. I shall look forward to using that one without restrictions! 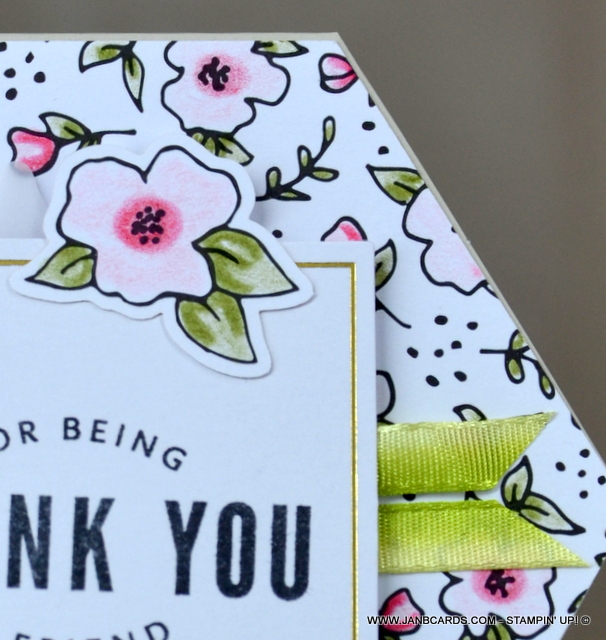 That’s it from me today. I look forward to being back with you tomorrow, In the meantime, stay safe, stay well, and happy crafting.