Yesterday I decided to have a play with the new Second Release Sale-a-bration stamp set called Well Dressed. My first idea was to stamp the hat over the shirt and tie but this idea fell by the wayside when I saw my Stamparatus was still sitting on the side after having used it on Monday. I decided to use it for the hat and the stepping technique. I don’t think that’s the proper name for it but it’s where the plate gets moved down a notch after stamping the image. 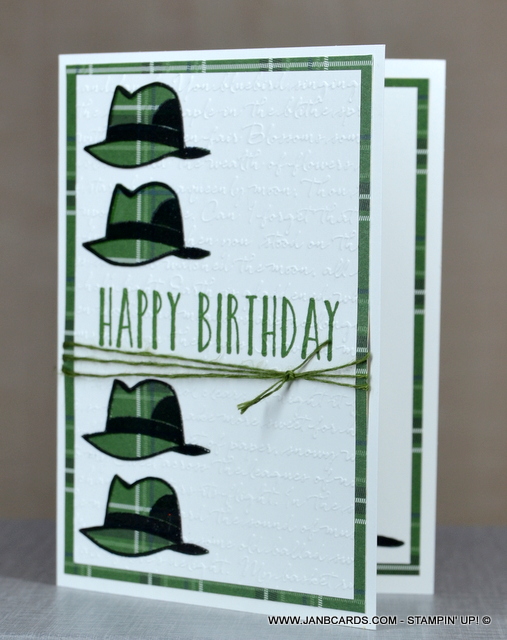 I’ve never tried this technique before and I am so very pleased with how easy it was. The first attempt was good but not quite good enough because I had a bigger gap at the top than I had at the bottom. After I cleaned my stamp I re-positioned it higher on a new Whisper White Cardstock (CS) layer. Using Night of Navy ink I stamped the first hat a couple of times to get a good depth of colour. 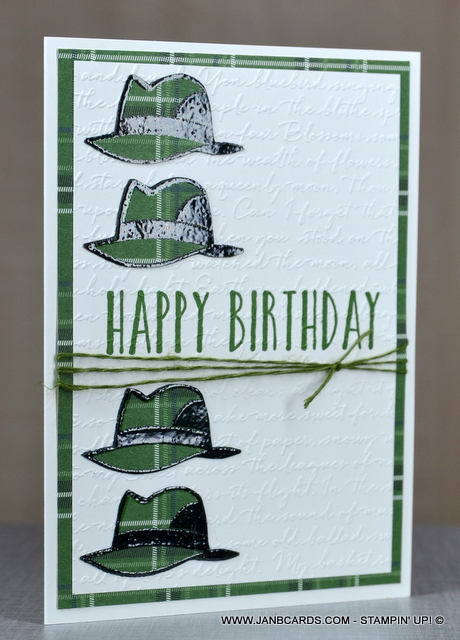 I moved my stamp plate down one notch and stamped the second hat a couple of times. When I was happy with the depth of colour I moved the stamp plate down two notches. At this stage, I wasn’t sure which sentiment I was going to use but I wanted to leave a gap for it. I continued until I’d stamped four hats. My next idea was to dry-emboss the hat layer with the Scripty 3D Embossing Folder. 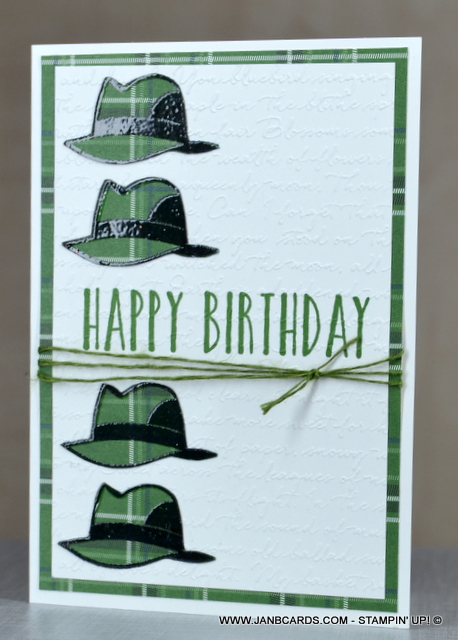 Then I planned to stamp four more hats on scraps of Whisper White CS, fussy cut them and adhere them over the dry-embossed hats! The hats on top would stand out because the Whisper White CS areas would be smooth, not embossed! All the time I had it in my mind to introduce some colour. I had several different ideas but the idea I liked best was to use the green tartan design from the Country Club Designer Series Paper (DSP) for the hats. 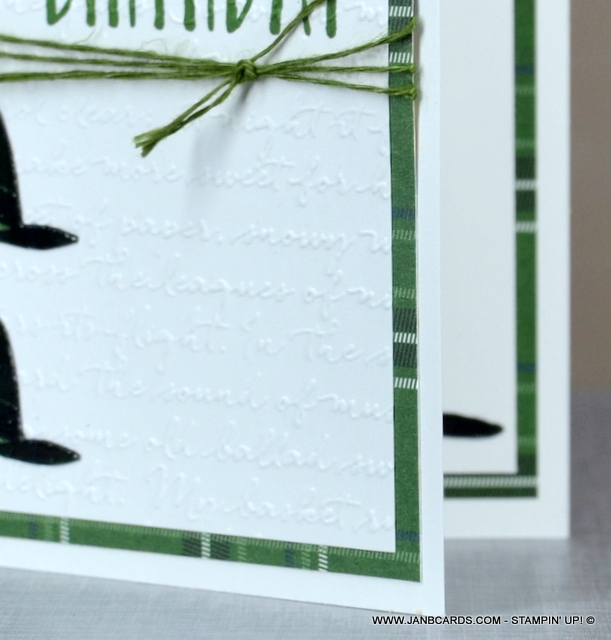 I cut my top Whisper White CS layer 1/8″ smaller than the regular size on both sides, and adhered it to a sheet of the green DSP that I’d cut to the normal size. Then I decided instead of four more hats in Whisper White, I’d do them in the green DSP. What a super effect!! I stamped them with my Stamparatus and heat-embossed them using the same technique I used for yesterday’s heat-embossing technique. It worked a treat! 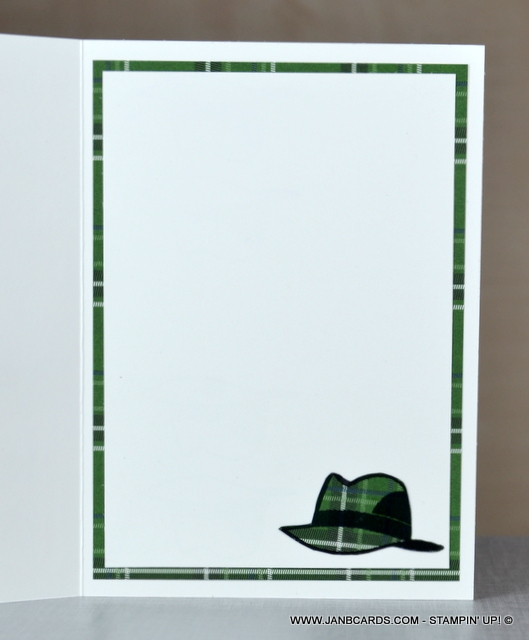 I gave the hats time to cool and then I fussy cut them as close to the heat embossing as possible without cutting into it. To finish of the hats I used the brush tip of my Night of Navy Stampin’ Write Marker, and working from the back of the image, went along the cut line covering up all the exposed DSP edges. I chose the HAPPY BIRTHDAY sentiment from the Perennial Birthday Stamp Set. I used my Stamparatus and it fitted into the gap I had left for it beautifully! 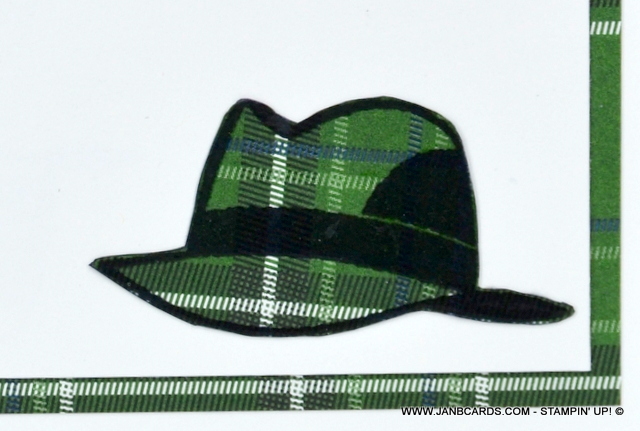 With hindsight, I wish I had gone over the sentiment with Versamark after I’d dry embossed the Whisper White layer and heat-embossed the sentiment. I don’t know if this would have worked on a “bumpy” surface. I must give it a try to see if it does! After I had adhered the top two layers together, I took a piece of Mossy Meadow Baker’s Twine and wrapped it around the two layers. I positioned it under the sentiment so it looks underlined! 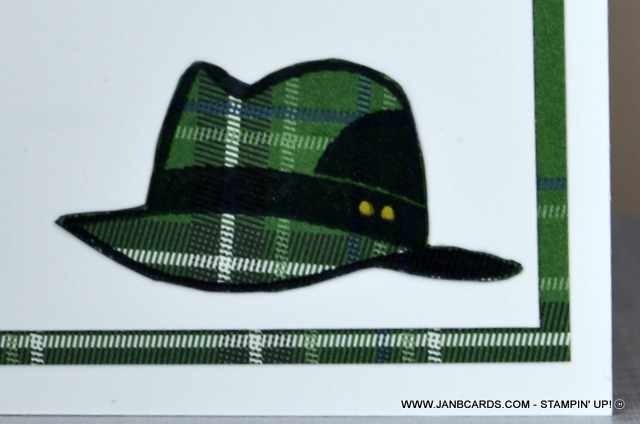 I felt the hat needed something to finish it off! I checked all my embellishments and gems and the only things I found that I liked the look of were the bows in the Bird Ballad Trinkets. On one hat the bow looked great but one on each of the four hats made them look like women’s hats which would be fine if I wasn’t making a masculine card. As I’m writing, I’m thinking about adding two small dots, to represent vent holes, on the side of the hatband just below the dark area. I did it! 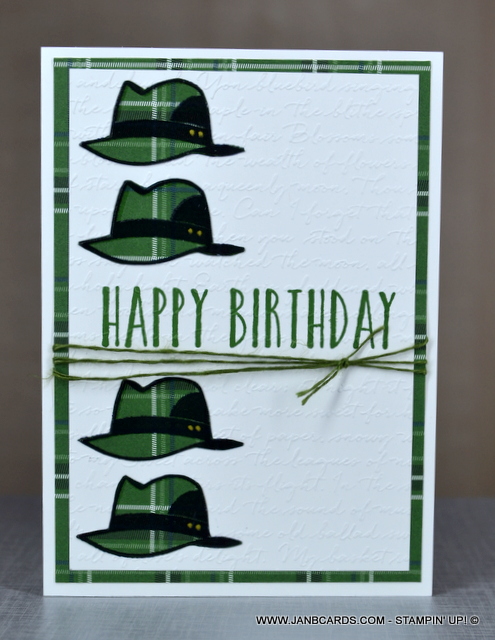 I went back to take some extra photographs! These last photographs have the vent holes, and apart from being larger than they should be, I’m glad I’ve added them! Inside the card, I added the same two layers as on the front card. I also stamped and heat embossed another hat on the green DSP. After I had fussy cut the hat and finished it off with my Marker pen as before, I adhered it in the bottom right-hand corner. 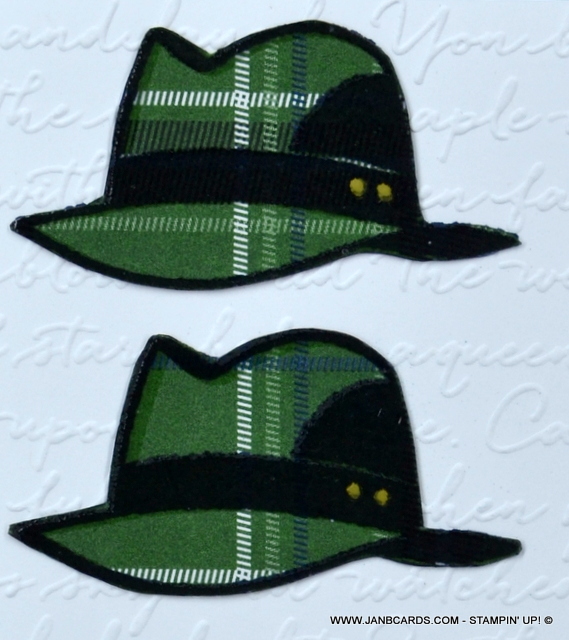 What do you think? Do you prefer the hats with or without the vent holes? I’ll appreciate your feedback. That’s about it from me today. I look forward to being back with you tomorrow and in the meantime, as always, happy crafting.