Today’s card is using one of the stamp sets I’m sorry to say that’s retiring on 2nd June 2020, although I’ll keep it in my evergrowing selection of Stampin’ Up! stamp sets that I won’t give up! It’s called Beautiful You (ret annual page 114) and is a two-box set. I used it a lot when it was first released in many different ways, my favourite being paper-piecing, which is what I tried with today’s card but it was spots overload! 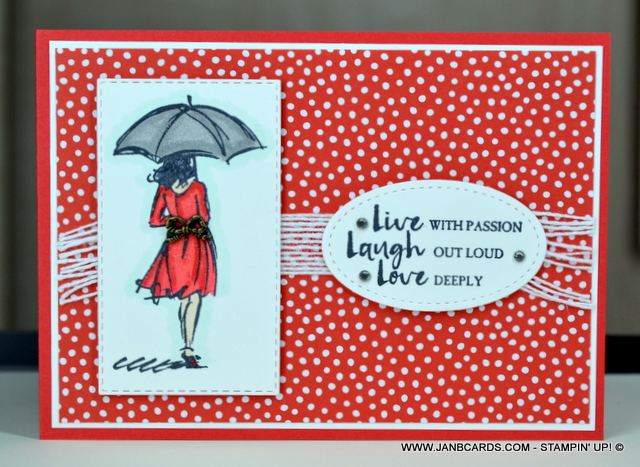 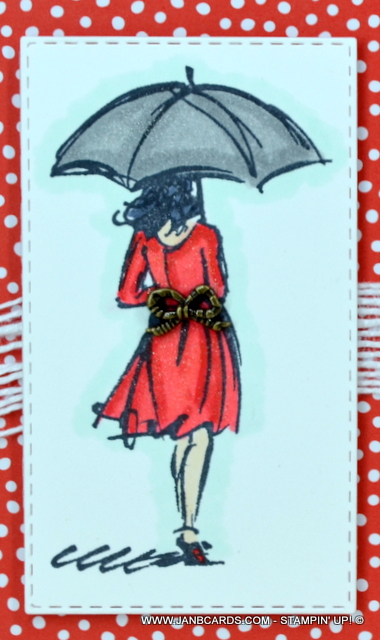 I filled in the gaps in the hair using the Light Basic Black Blend and the neck and legs in Ivory. The card I used is the same size as usual but opens on the short side rather than the long side like a tent, which is a bit of a challenge when it comes to photographing the inside! I started with a Poppy Parade Cardstock (CS) card base, then a middle layer of Whisper White CS and a top layer of last year’s white spot design from the Brights 6″ x 6″ Designer Series Paper (DSP).

I wanted to wrap a ribbon around the top two layers before adhering to the card base but the only ribbon I have in Poppy Parade is too thick to be wrapped around layers without having to pop the whole layer up on Dimensionals, which is something I don’t like doing! Instead, I decided to use some 5/8″ Whisper White Flax Ribbon (ret annual page 174). To make it a bit different I cut up about an inch between each cord on both ends and splayed them out.

I adhered the Flax Ribbon it to the card front using some SNAIL, which is also retiring on 2nd June 2020. I’m excited to say Stampin’ Up! are introducing two new tape runners in the new annual catalogue, one to replace SNAIL and one stronger more like Fast Fuse but better! The sentiment I chose from this stamp set is my favourite LIVE WITH PASSION LAUGH OUT LOUD LOVE DEEPLY. Using Memento Black Ink again, I stamped onto Whisper White CS.

I used the Stitched Rectangle Dies no 3 to die-cut the image and the Stitched Shape Dies, oval no 2 to die-cut the sentiment. They were both popped up on Dimensionals going across the ribbon. The final step to finish off the front of the card was adding three Basic Rhinestones to the sentiment and also one of the bows from the Bird Ballad Trinkets (ret annual page 177).

That’s it from me today. I look forward to being back with you tomorrow and in the meantime, please take care, stay safe and stay well! Happy crafting.