Yesterday morning Vicki and her husband Leigh popped over to drop some shopping off for us. Unknown to me, hubby had brought four garden chairs round from the back garden set them up in the front garden making sure we adhere to social distancing rules of two metres! We sat and had a cup of tea and a catch-up while waiting for 11 a.m. for the two minutes country-wide silence for the fallen servicemen of World War II – yesterday was the 75th anniversary of Victory in Europe Day! 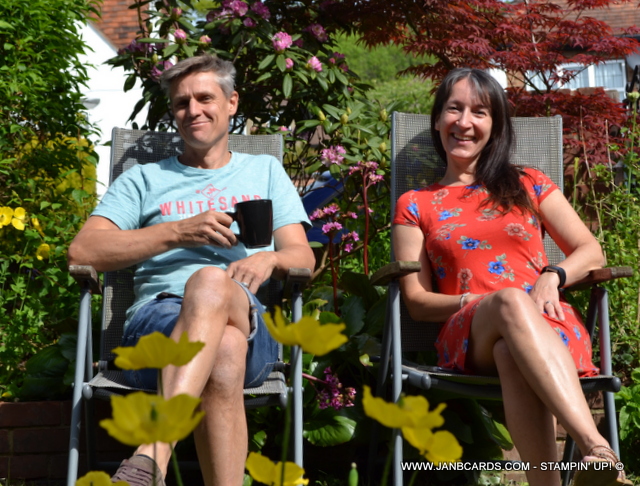 To create today’s card I used the gorgeous Botanical Tags Dies which co-ordinate with the Botanical Bliss Stamp Set. I always intended to make bookmarks using the three different designs in this set, but like so many other things, I never found the time! Both of these products will be retiring on 2nd June but I think they will go with my ever-growing collection of dies and stamp sets I won’t be selling!

I chose Shaded Spruce as my colour because I wanted to use the branches with the leaves and this is a green I don’t use often. My plan was to die-cut the birds and leaves and to have the Shaded Spruce Cardstock (CS) showing through. I also wanted to emboss the Whisper White CS top layer but avoiding the die-cut area. For my first attempt, I cut the die-cut area off the top layer which I then embossed with the Basket Weave Dynamic Embossing Folder (EF). This idea failed!

Unfortunately, I’d put the layer in the EF slightly crooked and it was very obvious! I took another Whisper White CS layer and did another die-cut of the birds and leaves. This time I embossed the entire layer, i.e. including the die-cut, using the Subtle Dynamic EF. I didn’t want to have the die-cut image embossed, so I adhered the non-embossed die-cut from the first card and adhered it on top of the embossed die-cut! This idea worked!

I die cut two of the branches with leaves to have them arching over the die-cut but I only had one die so the two branches curved in the same direction. To get over this, I took a scrap of paper and put it over one of the branches which I laid face-down. I used my bone folder and went over the die cut several times to flatten the outside edges as much as possible. Then I repeated this process on the second die-cut but faced it upwards, and used my bone folder to flatten the die-cut curve.

By doing this I made the two die-cuts look almost identical! When I adhered them on the top layer, I kept their shape as much as possible. I stamped the sentiment HAPPY BIRTHDAY from the stamp set using Shaded Spruce Ink and die-cut it using a label die from the Stitched Labels Dies. These dies co-ordinate with the Stitched All Around Stamp Set; both products will be retiring on 2nd June. Using Dimensionals I adhered the sentiment below the birds and leaves die-cut.

Next, I cut some Mini Dimensionals in half to pop the birds and leaves die-cut up. I also needed to cut some into quarters to support the leaves. It was a bit fiddly but well worth the effort! My final touch for the front of the card was adding three of the largest Shaded Spruce Rhinestones from the Holiday Rhinestone Basic Jewels which were available in the Christmas catalogue.

Inside the card, I added a middle layer of Shaded Spruce CS and a top layer of Whisper White CS. I had two more branch die-cuts I wanted to adhere at a 90° angle in the bottom right-hand corner. This was achieved by putting liquid glue on the back of the first branch and pressing it down a little bit at a time straightening it out as I went. I repeated the process for the second branch and it worked well.

That’s about it for today. As always I look forward to being back with you tomorrow. In the meantime, please take care, stay safe and stay well. Happy crafting.