Today’s card is another fabulous fancy fold card and is called a concertina fold. It’s like a lot of fancy fold cards in as much as it looks complicated but is actually quite straightforward to make. My prototype was the masculine card I made using the Sailing Home Stamp Set and Designer Series Paper (DSP). I have lost count of the number of cards I’ve made using this combo but it really has become my go-to set. What am I going to do when the DSP has retired? Oh, woe is me!! 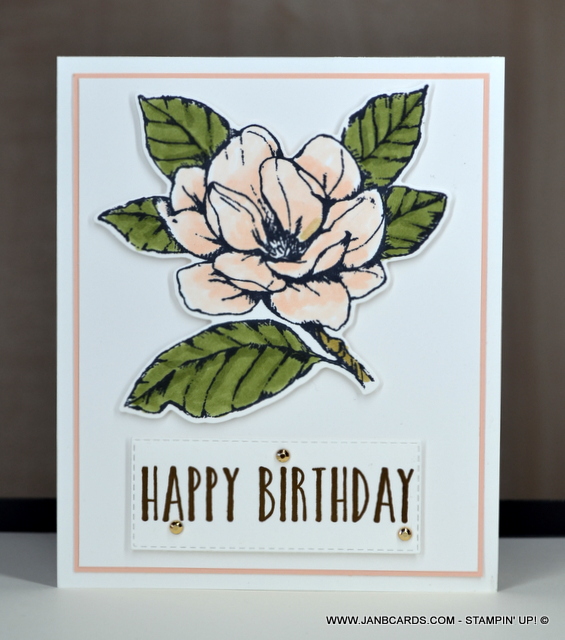 I didn’t finish the front of the masculine card because I’m going to use it for my son’s birthday which is on 27th May and I’m toying with the idea of giving one of the feminine versions to his partner Sasha as her birthday is on 21st May. To save time on the video, I fussy cut three magnolias from the same design sheet I used for the video and I’m really pleased with end result.

I did the same for the Parisian Blossom card but I used a similar design to the sheet I’d used for the main body of the card. It worked out equally as nicely as the Magnolia Lane card did which goes to show it isn’t necessary to stick to the same design to achieve a great look. Part of the driving force to do the fussy cutting was that neither of the stamp sets had a selection of small images to choose from. It’s a great opportunity to let the DSP do the work for you and the card!

I must admit that I was very doubtful about this card when I first saw it on YouTube. The video was made in 2011 and the crafter used patterned paper and it wasn’t put into a card base like today’s card. I had doubts about this card initially because I didn’t think the patterned paper could be strong enough to support the inner section of the card. As I watched to the end of the video it became obvious that the paper was certainly strong enough.

The biggest tip I gave for making this card is to choose a sheet of DSP where you can use both sides of it so when your card is finished you only have two patterns on your card. The alternative is to use two different sheets and have four designs on your card which I’m sure will distract from the beauty of it! When I was looking for designs I could use, I found several sheets to choose from.

There were two factors that cut down my options. Firstly, on some designs, I didn’t have enough DSP left to cut the sizes I needed, i.e. one piece 12″ x 6″ and the other piece 8″ x 4″. The second restriction was the lack of a co-ordinating stamp set combined with the fact the DSP didn’t have designs that lent themselves to fussy cutting suitable images. Any other time of the year, I would have had a far greater choice, but this year I have done exceptionally well in using up my DSP.

It was a great card to make and I hope you give it a try! That’s about it from me today. I hope you have a very blessed Sunday and I look forward to being back with you tomorrow. In the meantime please take care and stay safe. Happy crafting.