Today’s video is a project I have wanted to do for quite a little while now but never got round to it. As you know my normal process is to make the first card – the prototype – then one immediately before making the video, and then the video. With this card, I could have made five or six different versions while tweaking this or tweaking that! It’s a good job I don’t have the time to do that! 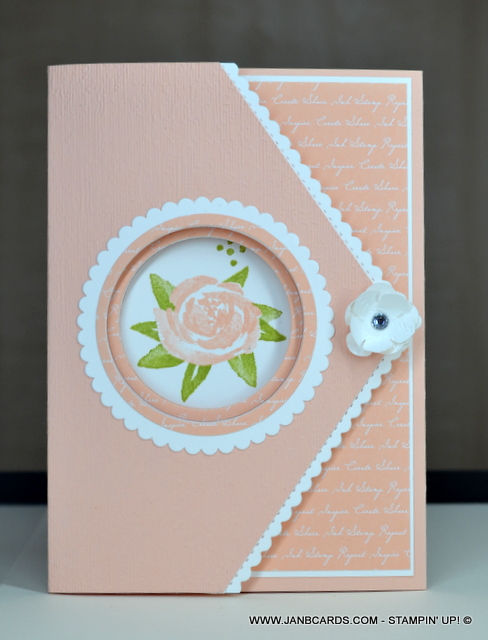 I know there are already a few videos on YouTube showing how to make this card but I wanted to put my spin on it. One of the big changes I made was to use magnets to keep the card closed after I’d tried Velcro Dots but found they were far too strong. One of the problems I experienced making this card was the scratch marks caused by my amazingly overworked Big Shot Cutting Plates!

I was so pleased with the effect, I made a larger DSP circle to go over the Whisper White CS scalloped circle on the front of the card. If I haven’t explained that very well, please see the photographs – a picture speaks a thousand words much better than I can! LOL! One thing I forgot to mention in the video is about a space to write a message.

One idea is to die-cut a fancy shape using Whisper White CS and adhere it on the back of the card. Another suggestion is to cut three pieces of Whisper White CS instead of two and adhere the third one on the back of the card. Whenever I post a video I always put the measurements of all the cardstock and DSP pieces, scorelines, etc., in the box below the video. On this occasion, I have also put the US measurements as well!

The Highland Heather card was the card I made before the video. On the inside layer that had the sentiment and stamped images, I also used a small stamp from the stamp set and stamped it randomly to make the stamping look less sparse. I didn’t do this to the card during the video but I did afterwards. I chose a stamp with five small circles/dots that I found in the Painted Harvest Stamp Set. I think it finished the card off beautifully.

That’s it from me today. I wish you a very blessed Sunday and I look forward to being back with you tomorrow. In the meantime, please take care and stay safe. Happy crafting.