Last Monday I shared a card with you that I’d made by weaving strips of Designer Series Paper (DSP) and used it as the feature of the card with a sentiment. I had CASE’d a card made by fellow demonstrator Felicity Dagg who posted her card as a Virtual Swap during our Virtual OnTour event which was organised by Stampin’ Up! I was asked by a few crafters if I’d make a video to show how I did the weaving. 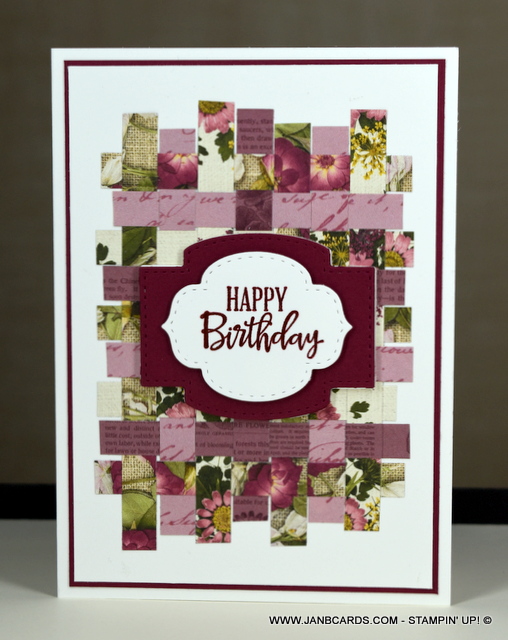 Yesterday morning I made a masculine woven strips card using the Come Sail Away DSP but I changed from using half-inch strips as per my first card and used 3/8″ strips instead. I thought it looked much better, more like Felicity Dagg’s card. It’s a great card to make and I decided to make another one before I started making the video. For this card, I used the Pressed Petals DSP and this one is definitely my favourite! 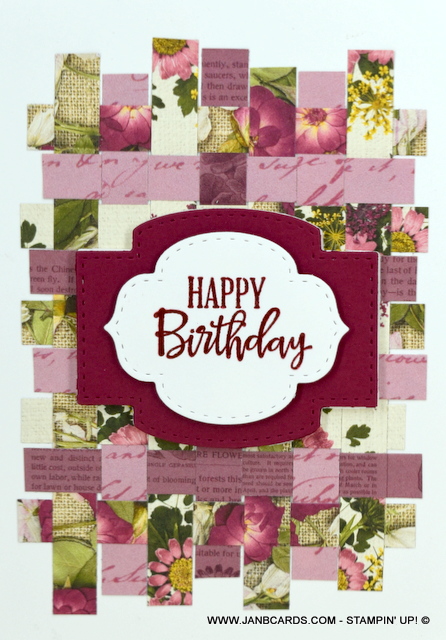 The layer behind the sentiment should be, according to Felicity’s card, made with one of the DSP designs used as one of the stripe designs. When I did this for the Pressed Petals DSP I didn’t like it. I re-did it using Merry Merlot Cardstock (CS) which I think looks great! When hubby saw it he said he wasn’t so keen on this one because it looked like a tombstone!! I agree the DSP looks better but I wouldn’t have gone as far as saying that! LOL!

The masculine card was a bit more of a challenge than the other three cards I’ve made because the designs on the DSP are directional designs. This meant that when I was cutting the strips I had to have some that were cut with the pattern in the vertical direction and some with the pattern in the horizontal direction. All the time I was working with the woven piece for that card, I had t be aware that there was a right way and a wrong way!

I didn’t add any embellishments to the three floral/leafy designs but I did to the masculine card. This wasn’t a decision I made, it just happened! I adhered a steering wheel trinket to the sentiment using Tombow glue, and I also tied a reef knot which I adhered to the top part of the sentiment. I’m not sure what the twine was that I used except to say it’s definitely a Stampin’ Up! product. If I remember correctly, I think it was in a kit I’d bought, possibly last year’s global Paper Pumpkin.

In this video, I also demonstrated how I did heat embossing on a sentiment I had stamped with my Stamparatus. Last Wednesday I shared a card where I had heat embossed a stamped sentiment and I decided to combine a demonstration in today’s video of how to do this kind of embossing. Last week’s card also used another technique that uses marker pens to colour stamps. One day I’ll include that in a video too!

That’s about it from me today. I wish you a very blessed Sunday and I look forward to being back with you tomorrow. In the meantime, please take care and stay safe. Happy crafting,