I saw this Split Card demonstrated by Jennifer McGuire and just had to share it! Red poppies are my favourite flowers and red, white and black is my favourite colour combo for cards! It’s a win, win, win! There are other possibilities with this card and I did try one, but it wasn’t a success!

The two cards on Whisper White Cardstock (CS) card bases are the first two cards I made and I was really pleased with the result. I decided to stick with this design for the video but I changed the card base to Poppy Parade CS which I prefer. While I was preparing for the video I wondered if it would work if I used the other set of poppy dies called Poppy Moments. 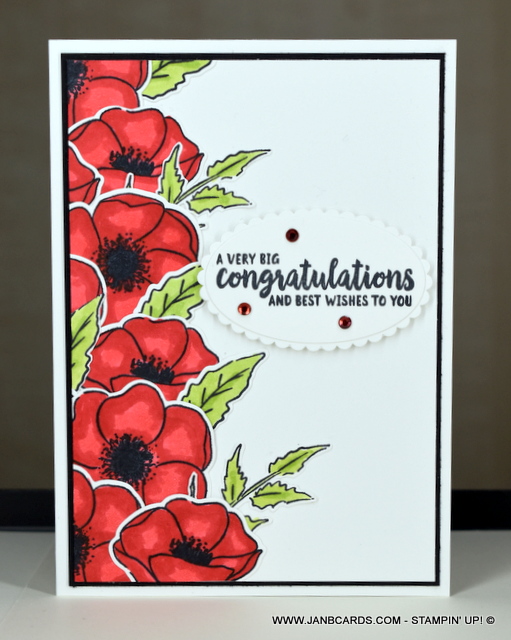 I thought it would be quicker because the images didn’t need to be stamped and coloured. The disadvantage of this set is that each poppy and each leaf are made up of two layers of cardstock. This meant that there was a minimum thickness of three layers of cardstock as long as two images didn’t overlap. Until I tried it, I didn’t know how many thicknesses our trimmer would go through! 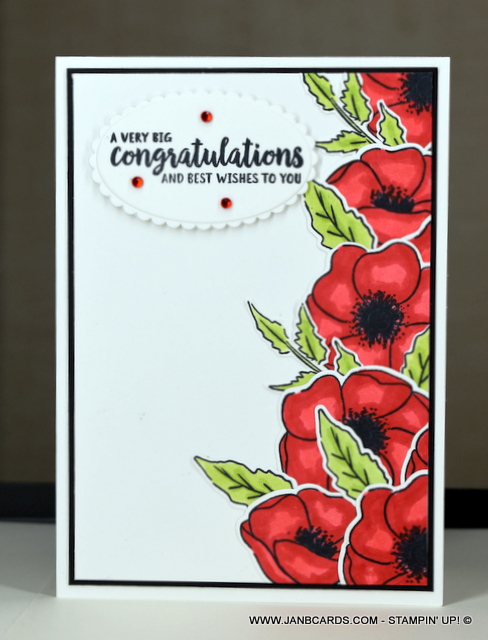 With hindsight, I should have tried cutting through four layers, then five layers, etc., until I found the level that was one level too many. As I didn’t have the benefit of hindsight, I decided to give it a go. As I was layering the poppies and the leaves, I tried to avoid layering one double-layer poppy onto another one.

I don’t think I was successful with this although I’m confident I avoided the double-layer leaves going over double-layer poppies! The design on my Whisper White layer that needed to be cut in half looked lovely! My Paper Trimmer decided to give me zero co-operation, so I assume I wasn’t as careful with my layers as I thought I had been! 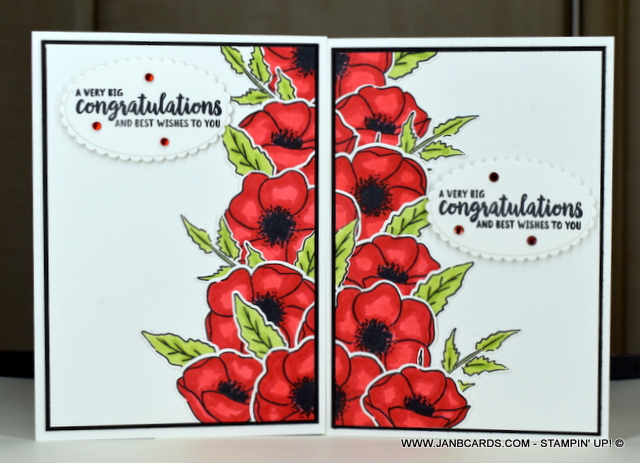 I thought I’d be able to get around it by using my guillotine to cut a slither off each side of the cut-edge to tidy it up! Even my guillotine refused to co-operate! Going forward, if I wanted to use images other than flowers, I’d try trees or maybe the Forever Fern Bundle. The Celebrate Sunflowers Stamp Set would work I’m sure! 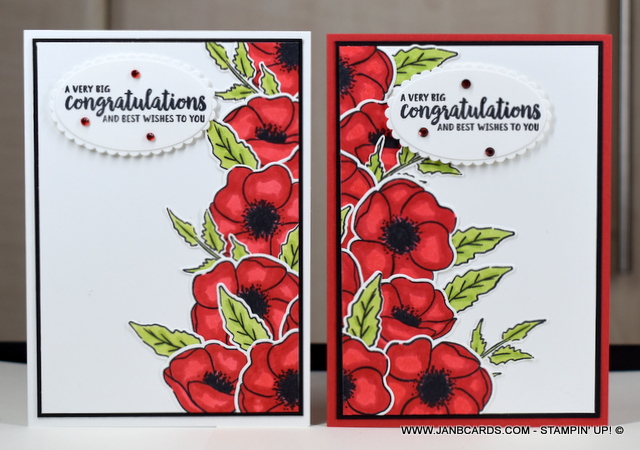 Like the Painted Poppies, there is a large sunflower, and a small sunflower as well as leaves, all which have co-ordinating dies! I did consider using the Timeless Tulips but only one size has a punch. The smaller tulips would be easy to fussy cut, although I think the one size tulips would work if they were either in three co-ordinating colours or three similar colours Purple Posy, Highland Heather and Gorgeous Grape.

Maybe that’s something for me to try another day! If you’re happy fussing cutting there are several other stamp sets would work, but I also think that it may work by stamping images but this would involve a lot of masking. At the end of the day, cardmaking is our hobby, our relaxation, so we can try all of these things in our own good time because we don’t have to work to a deadline!

I hope you like this technique as much as I do and give it a try. If you try any other ideas I would love to see your cards! That’s it from me today. I wish you a very blessed Sunday, and until tomorrow, take care, stay safe and happy crafting.