Yesterday I made three cards! Normally I only get time for one but I started working on Sunday’s video and after I made the first card I went on to make a second. I would love to have gone on to make a third but I had to discipline myself to get on with other jobs I needed to do! My third card is the card I’m sharing with you today! I CASE’d it from the catalogue but I had to add my layers!

The card I CASE’d is on page 18 of the catalogue and if you check it out there are other changes I made. For the poppies, I used Blushing Bride Cardstock (CS) and Rococo Rose CS. I think these are the same as Stampin’ Up! used. I changed the Stampin’ Up! Crumb Cake to Smokey Slate because I love pink and grey together.

I could have made life easier for myself and checked out the recipe for this card but I knew I’d go my own way anyway, so I didn’t. So I’m going to explain what I did rather than what I’ve changed! To create the background I die-cut two large and four or five smaller fancy outline poppies using Smokey Slate CS.

I glued the flowers as close together on the top layer without allowing them to overlap each other, although I did allow them to go off the edge. In the centre, I ended up with a large area that doesn’t have any flowers but I didn’t worry about it because I knew my poppies would cover it up. When I was happy I had covered all the area that would be visible, I trimmed off the pieces that went off the edge.

Next, I set about die-cutting all the other pieces I needed. I used Rococo Rose CS for the two fancy outline poppies and three buds. The only time I used Blushing Bride CS was for the bases of the two poppies, and the two middle layers of the card! Garden Green CS is what I used for the leaves around the buds and also the base of the three main leaves.

The outside of the main leaves, the highlight if you like, is in Granny Apple Green which really helps to give the Garden Green CS a lift. Finally, I used Smokey Slate CS for the centre of the two poppies, the sentiment, the top layers, inside and outside the card and the sentiment. I used my Stamparatus to stamp my sentiment on the Smokey Slate CS which allowed me to stamp it four times to get it very dark, although it has since lightened quite a lot! 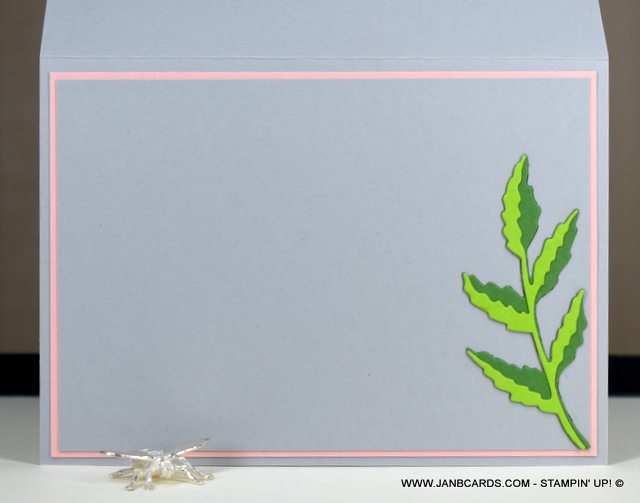 The sentiment is from the Peaceful Moments Stamp Set which is one of two great sentiment stamp sets we have in the new catalogue. The other stamp set is called Many Mates! When I die-cut the sentiment I thought it was going to be necessary to put it on a Blushing Bride CS layer because I was putting it on the Smokey Slate  CS top layer. This turned out to be unnecessary because the sentiment has a smooth background but the top layer has a patterned background – it was a big enough difference to make sure the sentiment didn’t disappear into the background! 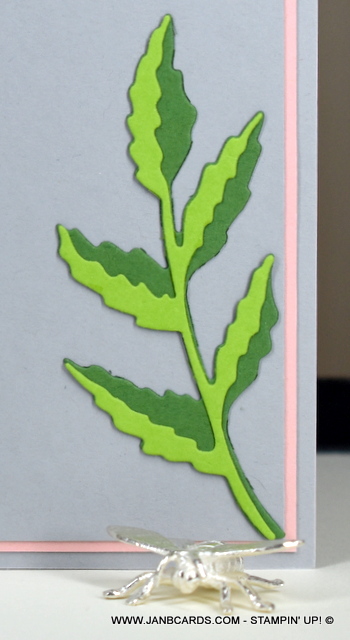 I pleased with how my version of the SU card has turned out, although I keep looking at it to see if there’s anywhere I could add some bling without it just being random! Unless I get a lightbulb moment the card will stay as it is. BTW I adhered one of the other types of two-tone leaves that are dies for, inside the card. I’d made it to see what it looked like, decided it wasn’t right for the front of the card and decided to adhere it inside the card. I didn’t want to make a poppy to go inside because I think it’s too big!

That’s it from me today. I hope you have a fabulous weekend. Please avoid places where people are packed like sardines i.e. packed popular UK beaches so you can stay safe and stay well. I look forward to sharing a video with you tomorrow, so in the meantime, happy crafting!