I’m not sure what’s different about today’s card but the Clear Wink of Stella Glitter is showing up very easily in the photographs. That’s not a complaint; I’d just like to know what’s different so I can always make it visible in my photographs! LOL! The Posted For You Stamp Set is on offer as a bundle with a co-ordinating punch.

The punch has been designed to make the image look like a postage stamp, and it’s one of three images that come in the stamp set. To colour the image I used Stampin’ Blends and started with Light Mossy Meadow for the leaves. For the birds, I used Light and Dark Crumb Cake with Light balmy Blue for their chests and Light Pool Party for the background.

After I had punched the image out I layered it onto a piece of Garden Green Cardstock (CS). The layer looked a bit harsh so I rounded the corners which isn’t something I do often. I knew I had the piece of Whisper White embossed CS and decided to trim it down to create a layer.

I had embossed the cardstock when I was experimenting with the small Greenery Standard Embossing Folder which has been designed to fit the new Mini Die & Emboss Machine. Although this is a standard embossing folder I found it benefits from being sprayed with water before being put through the Big Shot. Looking at the depth of the embossing you’d be forgiven for thinking the embossing folder was a 3D one!

I love the font of the sentiment HAPPY BIRTHDAY which is from the same stamp set. After stamping it using Tuxedo Black Memento Ink, I die-cut it using a die from the All Dressed Up Die Set. I die-cut an extra three layers and adhered them all together so I could pop them up on Dimensionals and be confident it wouldn’t bend in the post!

Look at the glitter in this photograph!

I added one Shaded Spruce Rhinestone from the Holiday Rhinestone pack at either end of the sentiment. Next, I painted over the leaves and both the birds using my Clear Wink of Stella Glitter Pen. I was at a bit of a loss how to decorate inside the card once I’d adhered a Whisper White CS layer. 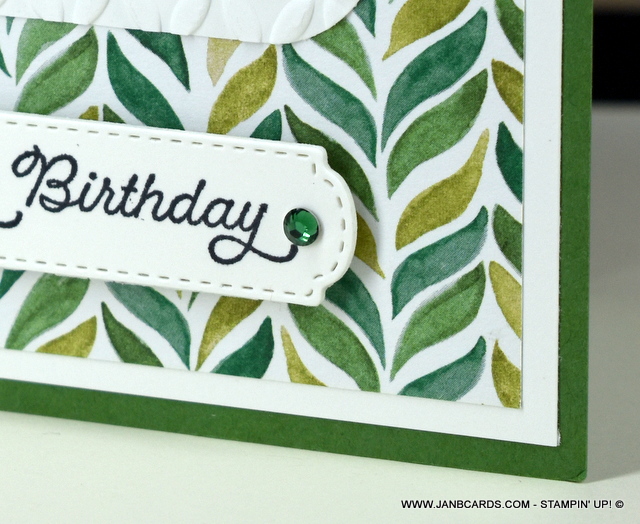 I had two 1/8″ strips of DSP left-over from when I trimmed the layer on the front of the card because I had decided to cut them down a bit for use. My second idea was to do the same in the top left-hand corner but using shorter strips. The pieces I’d trimmed off the first two weren’t long enough so I cut two more and rested them in position but I didn’t like the look. 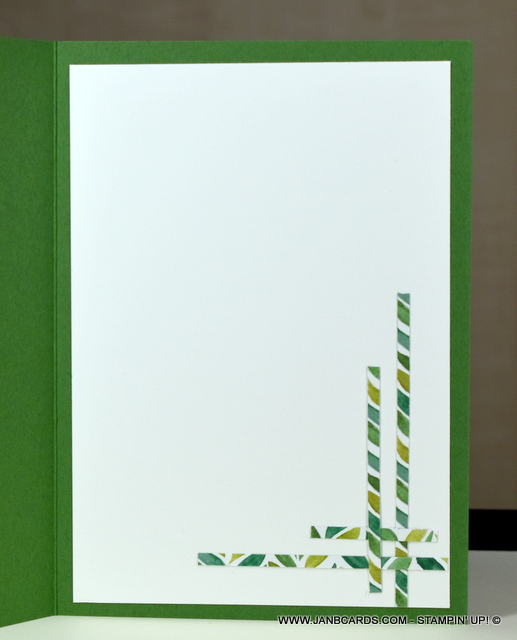 Next, I rested them in position on the two I’d already adhered in place in the bottom right-hand corner. I was much happier and adhered these two in place! 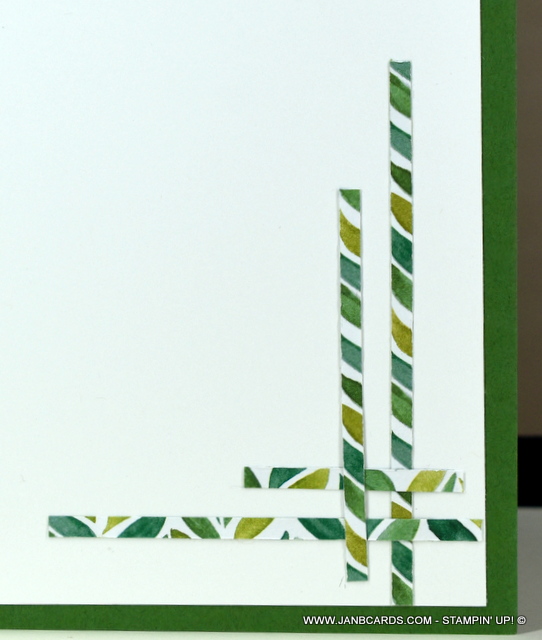 Before I go, a quick bit of news hubby received today! His company has changed its mind about putting him on furlough next week! He has very mixed feelings about it because he had planned lots of jobs he was going to do! But he counts his blessings he still has a job after the past three months of lockdown!

That’s it from me today. I hope you have a great weekend. Stay safe, stay well and happy crafting!

Products used for this project: please click on any of the links to be taken to my 24/7 online Stampin’ Up! shop. The Hostess Code for JUNE 2020 is EF7U2PC2. Thank you. xx