Many thanks for the suggestions that were put forward to help me finish off yesterday’s card. Your suggestions together with those I received on Facebook were amazing. Out of all the ideas put forward when I couldn’t think of one just goes to show I must have been on a different planet yesterday! LOL! 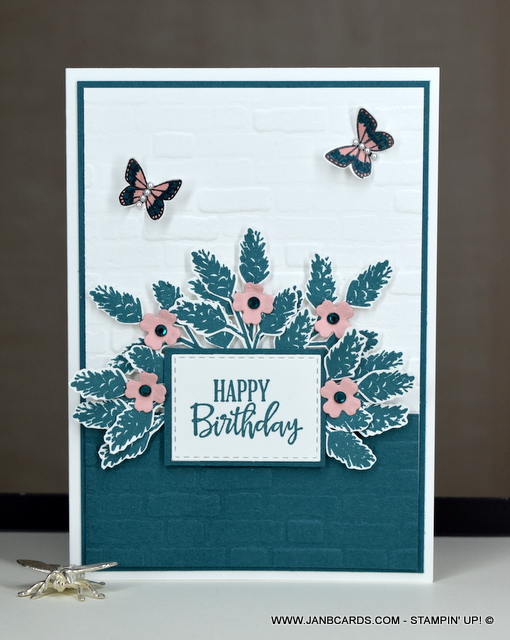 One suggestion was to move the sentiment and leaves up to the middle of the card which is what I wished I had done at the time. If I had tried moving them yesterday I think I would have torn the Whisper White Cardstock (CS) quite badly. The first idea I went with was having some Pretty Peacock CS embossed with the Brick & Mortar Embossing Folder coming from halfway down the sentiment. Although several people said they liked my card as it was – which pleased me and surprised me at the same time – it looked unfinished to me. After I had finished V2 hubby said he liked V1, so it does sound like its just me! 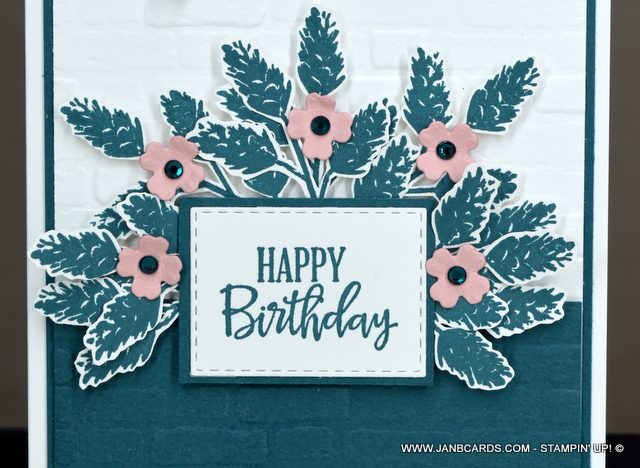 Nevertheless, I still needed to do something to make me feel happy with my card. You’ve probably noticed I’m a bit of a perfectionist when it comes to cardmaking! Another suggestion I liked that I felt I could actually do was to put more leaves on. I stamped and fussy cut six more images, and with the first one, I cut into three individual leaves and filled in some gaps between the original three sets of leaves. After playing around with several arrangements including a complete “wreath” I settled on half a “wreath”.

I was very pleasantly surprised at the amount of dimension I achieved with the leaves. A certain amount of it would get flattened if the card is sent through the mail but it would never go completely flat because of the Dimensionals I’d used. I only added two more flowers to the fuller arrangement. I felt it was alright for the leaves to be crowded as in a bush but flowers need their own space! I was successful in removing the bow in the top left-hand corner by using my Paper Piercer and tons of patience! It was easy to remove the remaining glue with my adhesive eraser without tearing the cardstock. 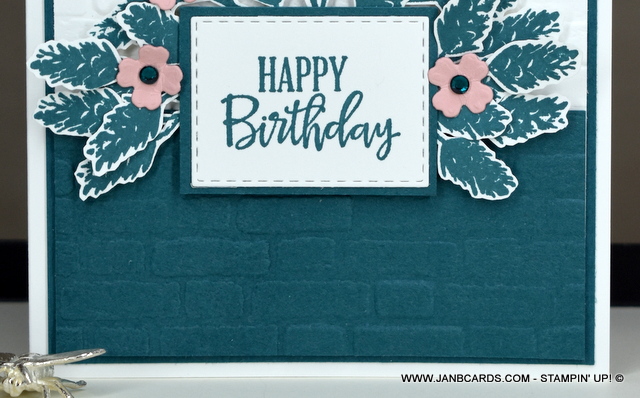 The top part of the card was still looking bare so I decided to add a couple of butterflies. Do you remember me telling you last week I was going to store stamped, die-cut, coloured, punched, images inside the front flap of the appropriate stamp sets? I picked the Butterfly Gala Stamp Set off the shelf because I knew I’d put several stamped unpainted images inside the front flap! I coloured two using the Blushing Bride and Pretty Peacock Stampin’ Write Markers.

After I’d punched them out using the Butterfly Duet Punch I adhered them in the top half of my card. I finished them off by adding a row of very small pearls along their body. I’m so much happier with my card and I’m very grateful for all the suggestions that were put forward. This morning I have an appointment at the hospital and in the afternoon I have an appointment at the opticians. My granddaughter is going to come over to see me after I get back……………………no time for working tomorrow! Hopefully, I’ll manage a bit of time crafting after dinner! That’s it from me today. I look forward to being back with you tomorrow and in the meantime please take care and stay safe. Happy crafting.