Today’s card is something a little bit different! Yesterday, I was working on the project I’m planning for Sunday’s video. Part of it involved using my sponge brayers to create a sky. I don’t know if you remember but when Stampin’ Up! first released these brayers I was less than impressed. I thought they were too soft and delicate to be able to do a good job! 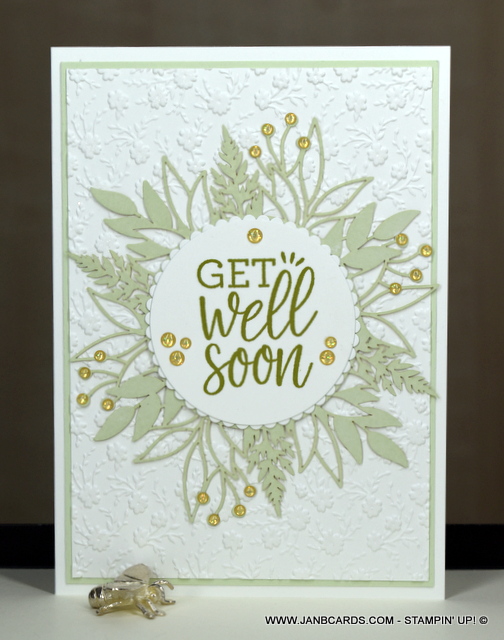 I ordered a pack so I could take them for a test drive and I was so impressed. After they have been used they just need to be washed under the tap by squeezing them until the water runs clear. The sponge roller will keep the colour of the ink used but they are safe to use on a different colour once it’s dried – which doesn’t take long. Sponge Brayers 141714: two handles and four sponges £7.50/€9.50 – see page 147. 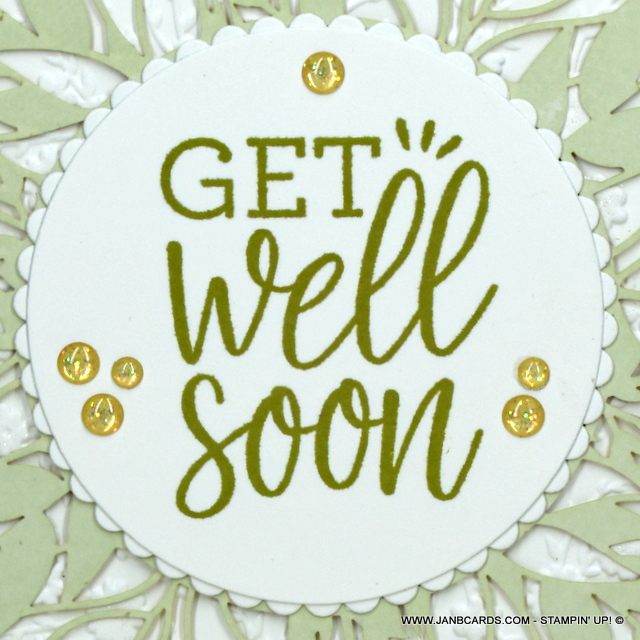 The Soft Sea Foam accent I’ve used under the sentiment is from the Forever Gold Laser-cut Specialty Paper which is gold foil on one side and white on the other. I used a Sponge Brayer and Soft Sea Foam Ink to change the white side to this beautiful pale green. I chose the GET WELL SOON sentiment from the Healing Hugs Stamp Set and stamped it using my Stamparatus and Pear Pizzazz Ink. 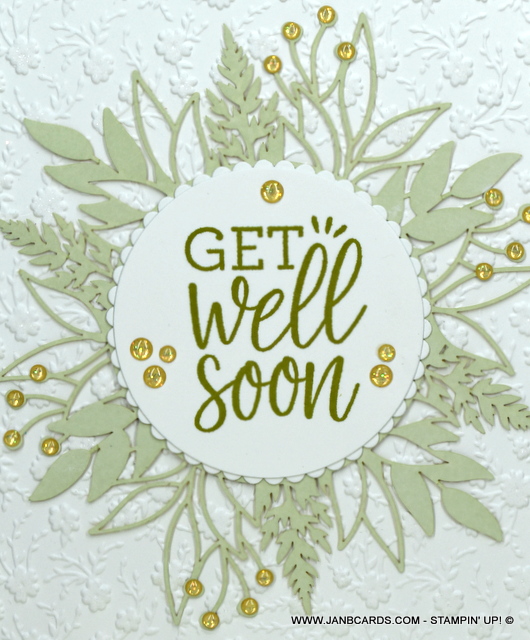 When I was working out what size Layering Circle Die I needed for the sentiment I guessed it wasn’t quite big enough to cover the ring of holes around the centre of the accent! I used the number 5 straight cut die and then I used the number 5 scalloped circle die to cover the ring of circles. It worked out perfectly! Next, I needed a layer for the accent and the sentiment. I decided that if I was going to use Designer Series Paper (DSP) it would detract from the accent. The next obvious choice was an embossing folder and I was confident that busy would work well as long as it’s white. I chose the fabulous – but very busy – Ornate Floral 3D Embossing Folder! 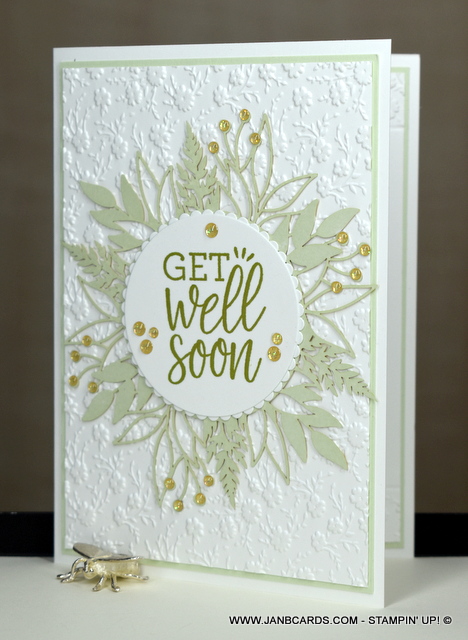 I started to put my card together working from the top down which meant adhering the two Whisper White circles together. I needed to get the rest of the front of the card put together before I could add the sentiment to the accent. The reason for this was that in certain directions the accent would overhang the edge of the card. I took a Whisper White Cardstock (CS) card base, added a middle layer of Soft Sea Foam CS and the embossed top layer of Whisper White CS. Now I could work out the best position for the accent and once that was in position I could adhere the sentiment. I was really pleased how well all the elements came together but it needed some bling. 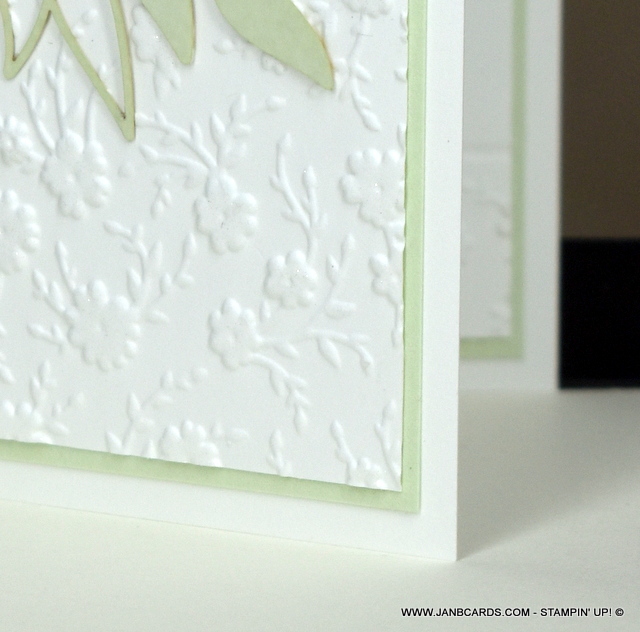 I’m so pleased to see we still have the Gold Glitter Enamel Dots available (152155 page 157). I decided to put one small Dot on each of the small solid circle dots on the accent and then some on the sentiment. I was watching Rachel Tessman – US demo – on Tuesday and she puts her bling in small clusters which I think looks so much nicer than just random. 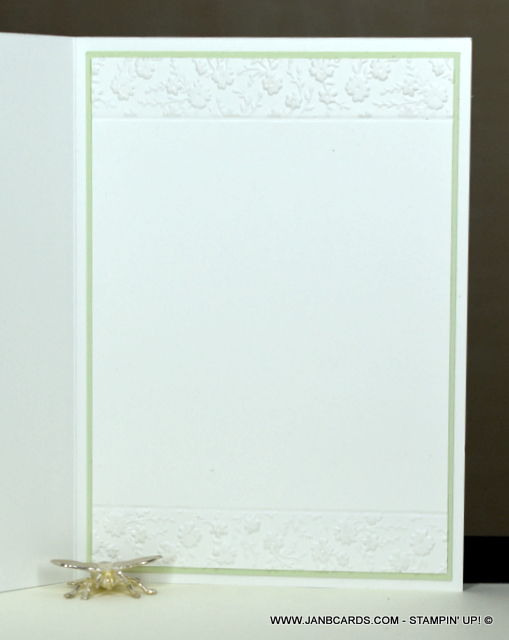 I wasn’t sure how I was going to decorate the inside of my card because there wasn’t an image or die-cut I’ve used for the front of the card that would tie it all together. Then I had a lightbulb moment! I decided to do some partial embossing with the Ornate Floral 3D Embossing Folder! Although I have done partial embossing before I’ve never used it as an idea for decorating the inside of a card! After I had sprayed my Whisper White CS top layer with a little water, I put about half an inch on the short side into the embossing folder. I lined the bottom edge up under the black line, and then a bit further so it was level with the black Stampin’ Up! logo box. I ran it through my Big Shot then took the cardstock out, and did the other end.

When I had done this, I put the layer onto my scoring board and scored a line along the top of the embossing. I turned it around 180° and did it to the other end. The two score lines just finish it off beautifully. I adhered the top layer to a middle layer of Soft Sea Foam and then inside the card. I hope you’ve enjoyed seeing something a bit different today – just a little bit of thinking outside the box! That’s it from me today. I look forward to being back with you tomorrow and in the meantime, please take care and stay safe.