I accidentally created designs for two cards when I made today’s card or a least two ideas for two cards. My main card is the stable door card but when you open the card and look inside the design would make another card on its own! I’d like to say I planned it that way but I didn’t – it just happened! LOL! 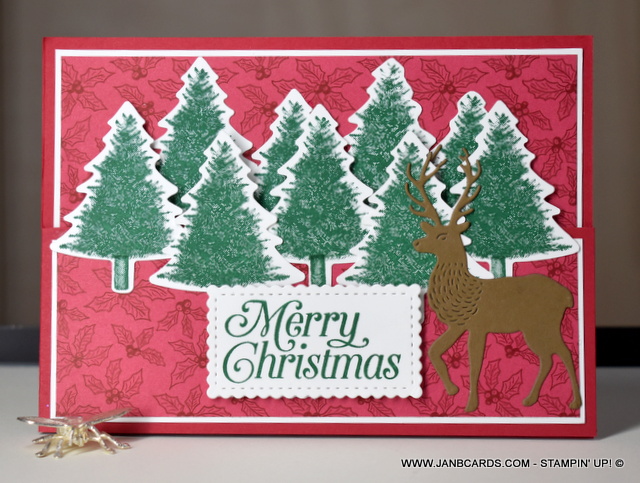 My original idea for this card was to use the Zany Zebras instead of Christmas trees. After I had fussy cut five of them I couldn’t arrange them in any sensible way that looked nice! I decided I’d go for trees instead, at least I knew they would work! When I made a similar card years ago I used flowers and that worked brilliantly, too! 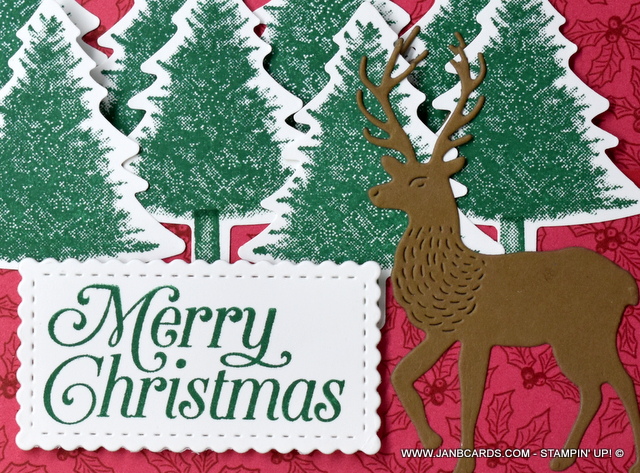 I took a standard size card but cut my cardstock lengthways so my fold is on the short side. Using my trimmer I started my cut from two inches up from the outside front edge into the fold. Next, I cut down the fold to meet up with my horizontal cut. This made my stable door. I adhered a Whisper White Cardstock (CS) layer that was ¼” smaller on both sides than my 2″ tall stable door and then added a piece of ‘Tis the Season Designer Series Paper (DSP) that was 1/8″ smaller than my Whisper White CS layer. 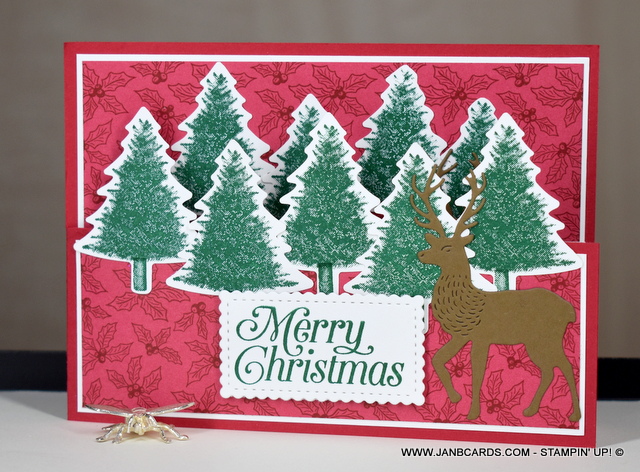 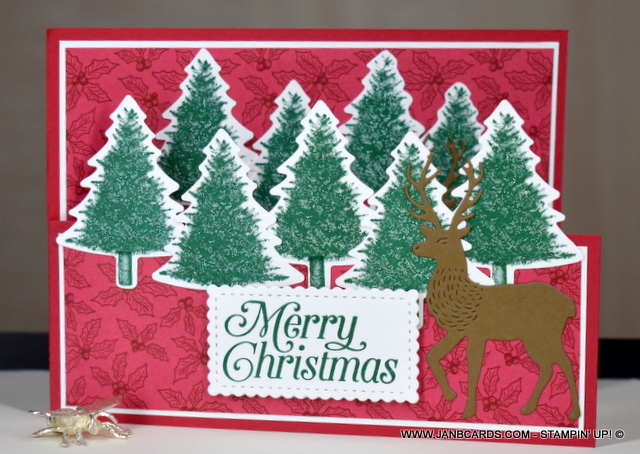 By doing that I unwittingly created a design that would look good as a card front with a sentiment in the large area of “snow”! I used my Stamparatus to stamp ten Christmas trees from the Perfectly Plaid Stamp Set which has been brought forward from last year. It co-ordinates with the Pine Tree Punch. 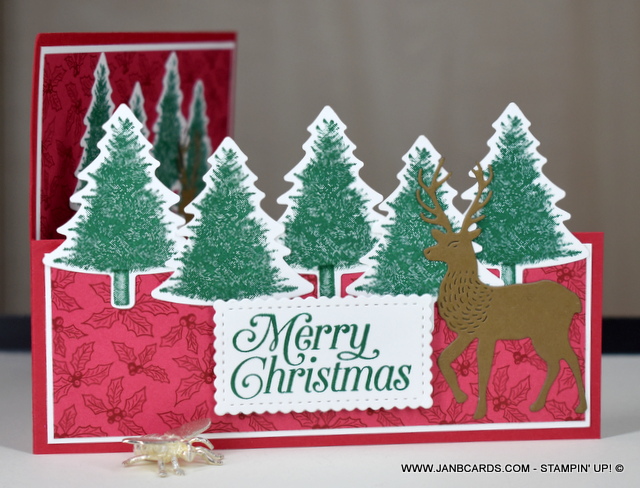 When I had the tree lined up on one of the plates I stamped the first tree and moved the plate down two notches to stamp the second tree. This left a gap that was too big and would have wasted cardstock. I decided to move my cardstock down so that the edge of it was almost halfway down the first “bridge” between the notches. I lowered the plate slightly to make sure my positioning was correct and stamped the second tree. 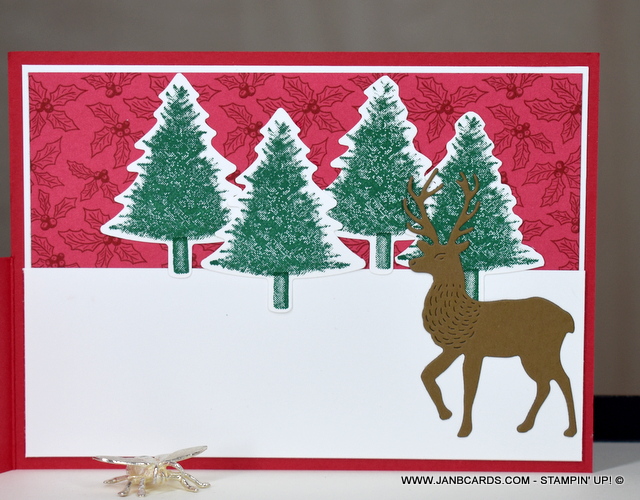 For the third tree, I moved the cardstock back to the beginning, moved the plate down one notch and stamped. This is my modification of the step technique using the Stamparatus. The first piece of Whisper White CS was so large I was able to turn it around 180° and stamp trees on that side too. On some of them, I misjudged the distance and when I punched the trees out some had a small nick in the lowest branch on the right-hand side. 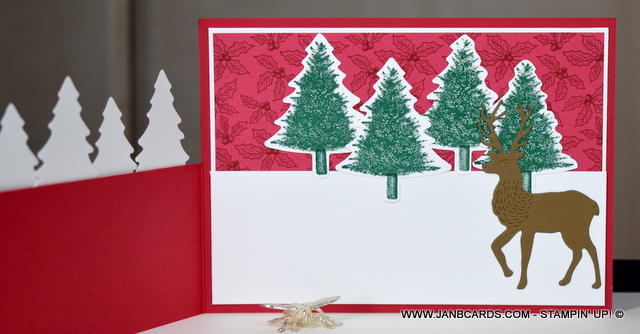 This wasn’t a problem because I made sure that the branch was placed where I knew it would be covered by another tree. I decided to die-cut a reindeer from the North Pole Wonder Dies to add a bit of interest to my card, and then decided to die-cut a second one for the inside of my card. These dies co-ordinate with the Wishes & Wonder Stamp Set. 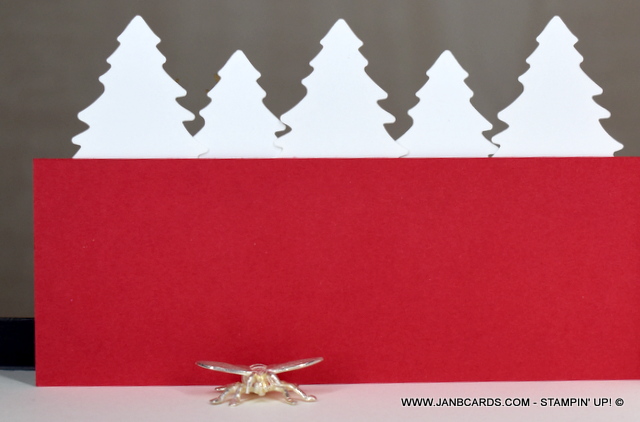 I chose the MERRY CHRISTMAS sentiment from the Perfectly Plaid Stamp Set and die cut it using the no. 2 die from the Stitched So Sweetly Dies. My original plan was to have it on the inside of the card above the stable door but the trees were taller than I imagined but I’m very pleased how my card turned out. I think the card is lacking some glitter so I might go back to add some!

I hope you have a really super weekend and I look forward to being back with you tomorrow. In the meantime, take care and stay safe. Happy crafting.