If I had been planning this card for a video it would be my first prototype and I’d go back to the drawing board to correct the parts that are wrong. Please don’t think I’m being hard on myself. As I go along explaining how I made this card, I’ll also explain why it needs some alterations to it. Overall I’m very pleased with the idea and the design but it wouldn’t survive going through the post as it is! 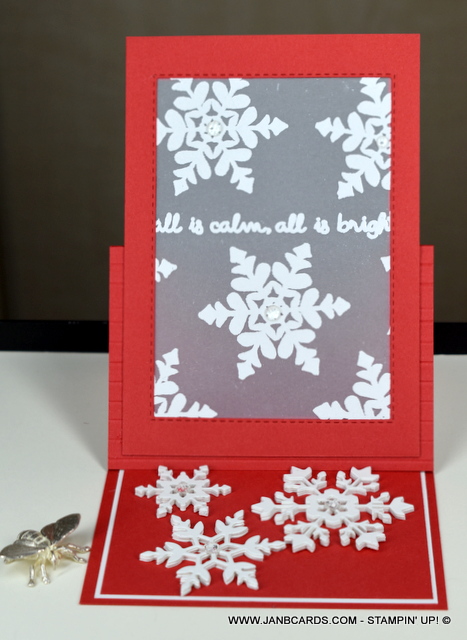 The basic idea is for an easel card with a heat embossed Vellum window so it can have a battery-operated tealight behind it. I thought it was a great idea to have the sentiment heat embossed on the Vellum along with the snowflakes. The stamp set the snowflakes are from is called Snowflake Wishes and has co-ordinating dies called So Many Snowflakes – currently available as a bundle which saves 10%.

My card size is the usual A6, or half a US sheet of cardstock, but cut vertically so the fold goes across the top of the vertical card. The layers are also the same as normal. For the window, I took two top layers of Poppy Parade Cardstock (CS) and a piece of Vellum CS that was one-eighth of an inch smaller on the vertical side and the horizontal side (of a top layer). 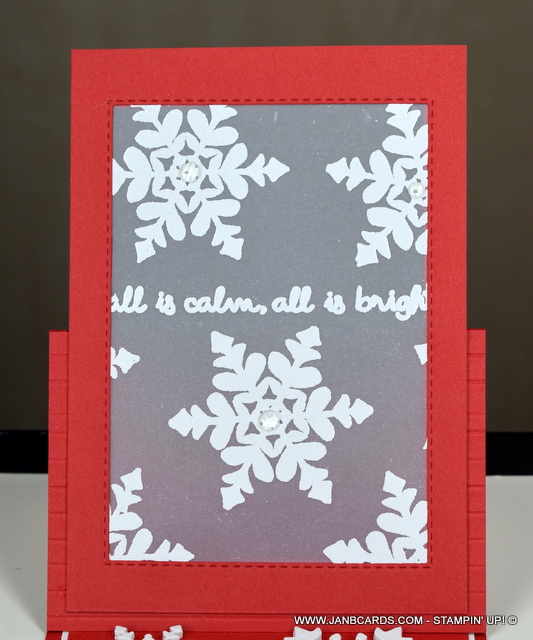 After wiping over the Vellum sheet with my embossing buddy I stamped the sentiment first – which is from the Sweetest Time Stamp Set – using Versamark. Next, I stamped the snowflakes and then dipped the Vellum into my Whisper White Embossing Powder and heat set it. Vellum invariably buckles slightly when heat embossed. After I had given it a few minutes to cool down, I put it inside a sheet of computer paper I’d folded in half, and then put it under my craft mat to flatten it. 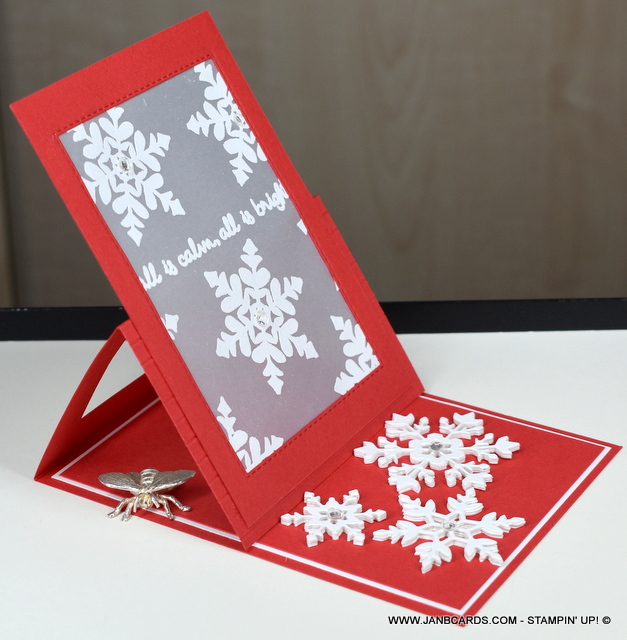 I have two new products in my studio both of which I’m finding to be a great help! First is the Purple Tape I see so many US demonstrators use. Hubby went online for me and found a supplier in the UK! The second new product is my Stampin’ Up! Cut & Emboss (C&E) Machine. It’s an exclusive SU machine and will be available to customers on 1st September 2020. 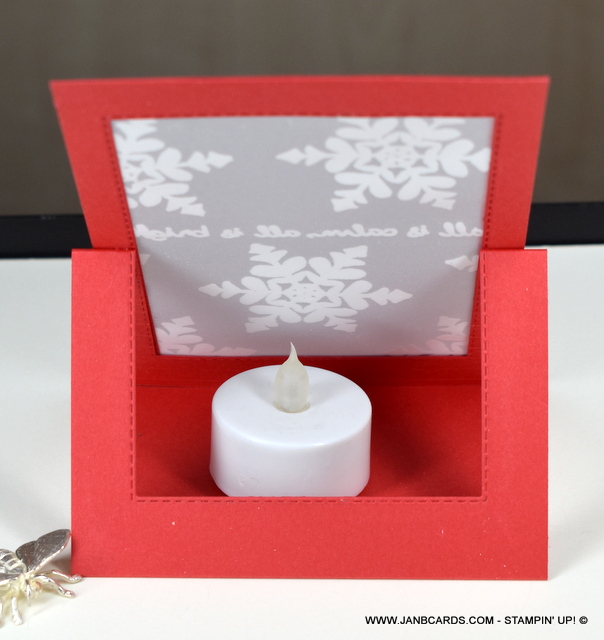 To cut the windows, I put the two top layers together and held them with some purple tape. I took die no. 6 from the Stitched Rectangle regular dies and positioned it in the centre of the cardstock. I ran it through my C&E machine just once. It was tougher than usual to crank through because I had two pieces of cardstock together. Although the die cut through both layers beautifully, I did find when I do this with stitched dies – with my Big Shot and my C&E Machine – the stitches seem to interlock the two pieces of cardstock together. It just means taking care when separating the two pieces. 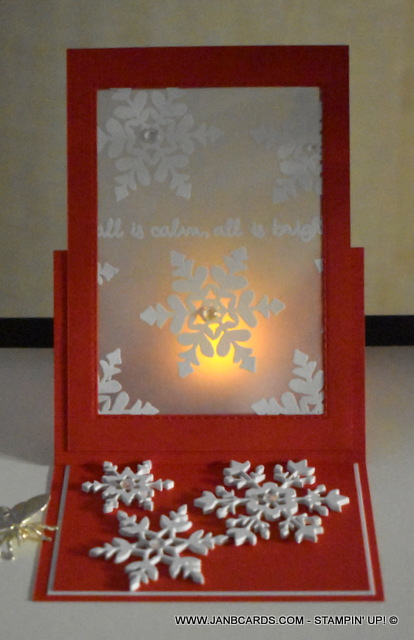 I used the same die to cut a window in the front of my card base. Next, I adhered a middle layer of Whisper White CS and a top layer of Poppy Parade CS onto the bottom of the card. I scored the window frame at halfway but made a mistake with my maths and scored in the wrong place! To disguise my mistake I scored at every quarter of an inch on the front part of the top half! 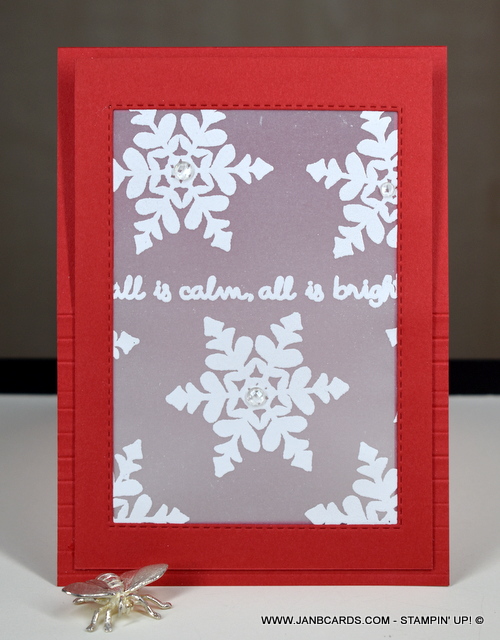 The reason I wanted the sentiment embossed with my snowflakes was so I could put some die-cut snowflakes on the bottom half of my card to act as a stopper. I used my C&E Machine to die-cut seven each of three different snowflakes all of which have a fair amount of detail in them, but I only had to run them through the new machine once! Next, I adhered them altogether! It was time-consuming but worth the effort! 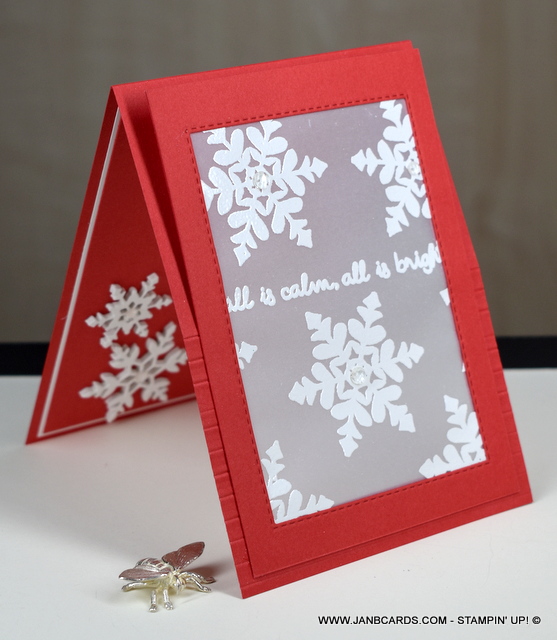 I had to use my paper piercer to push the bits out. Next time I’ll run them through twice to see if this makes any difference. I would definitely had to do it with my Big Shot plus adding a shim! I could also have used my die brush! When I had finished my snowflakes I adhered them to the bottom half of my card. It was when I closed my card I realised that the snowflakes would not go through the post under the vellum sheet. Certainly, with the gemstones, the vellum would have been torn! 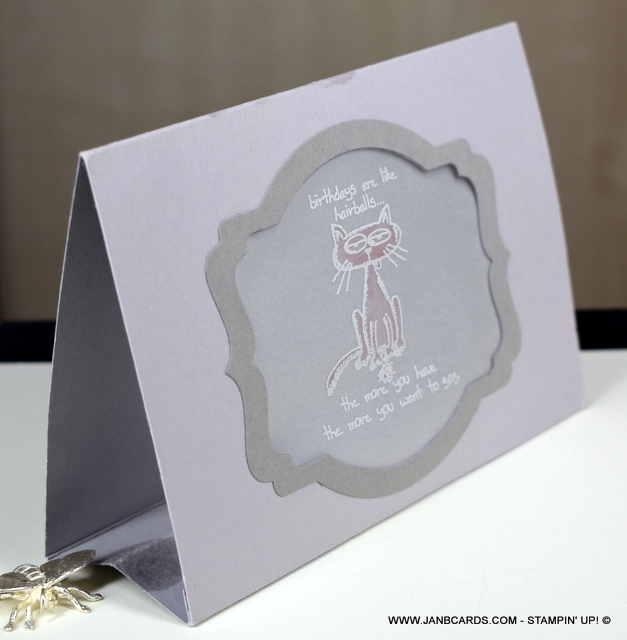 The last card I’m sharing with you today is a card I made hubby several years ago. This would have been a far better way to use the Vellum idea with a battery-operated tealight. The easel card with vellum would be great if it had a simple stopper, maybe just a sentiment. Although it’s disappointing the idea didn’t work out, it’s all part of the learning curve of cardmaking! I hope you’ve enjoyed this project and following through with my thought processes! 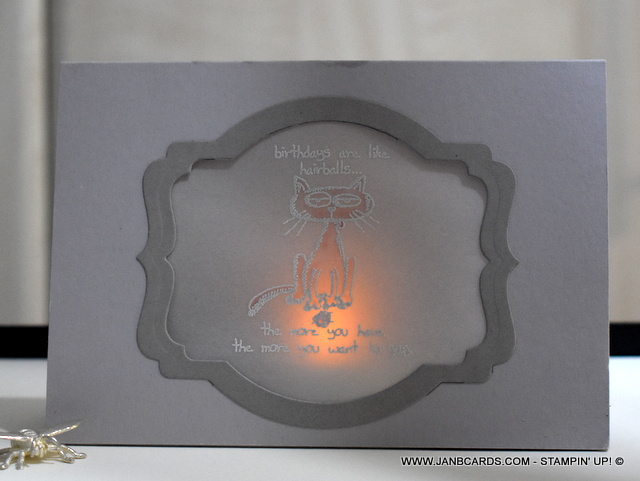 That’s it from me today. I look forward to being back with you tomorrow and in the meantime please take care and stay safe. Happy crafting.