Today’s Christmas card has been made totally with die-cuts from the Trimming the Town Designer Series Paper (DSP), i.e. excluding the sentiment SEASON’S GREETING. This is from the Itty Bitty Christmas Stamp Set that was brought forward from last year! YAY!! I found the sentiment ready-stamped in a small cello bag inside the stamp set. It’s part of my new system of saving stamped images I’ve created but not used. 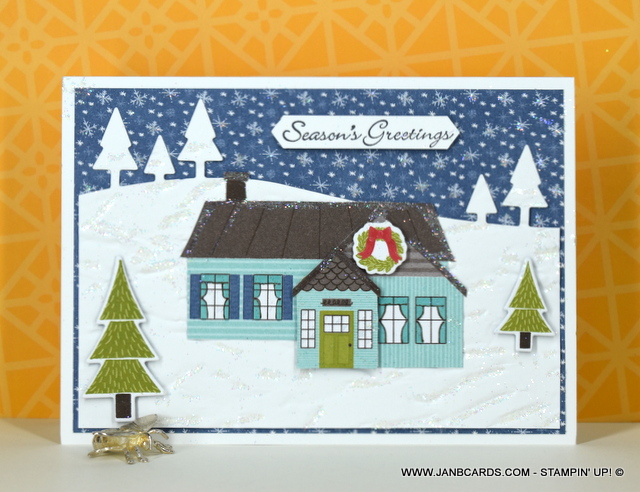 You may remember I used to pop all these pre-made unused images and sentiments into a small box on my desk. Every now and again I’d say that I’d made today’s card using images and a sentiment from this box. The problem was that I was adding to this box every day and didn’t stand a chance of ever catching up! With my new system, I always have a look inside the cello bag in the stamp set before I make a start on a card! So far so good. 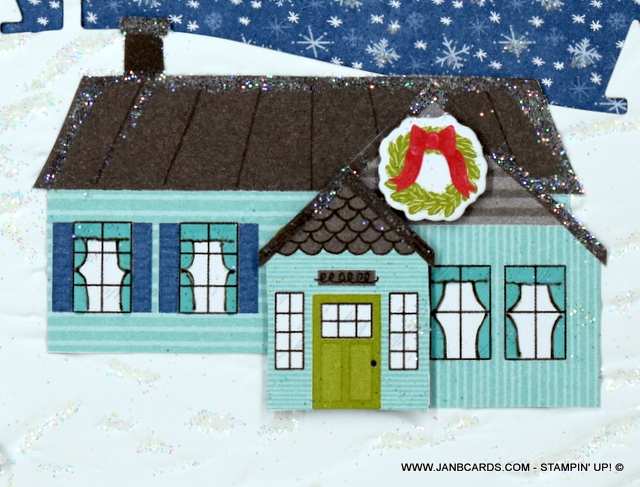 My card was inspired by a card I saw on one of Nutzaboutstamping’s videos. I liked how Terri cut her layer of snow with the trees and embossed the sheet using the Old World Paper 3D Embossing Folder. She was right when she said it makes the snow look realistic. It also adds realism to the five white trees on the horizon. I added Dazzling Diamonds to mine even though, sadly, it is now retired!

I started my die-cutting with three houses which I had already seen adhered together to form one large house! To keep everything looking as authentic as possible I chose the three houses that were all in the same colour, i.e. Pool Party. Unfortunately, I tend to be very critical of images, e.g. I don’t like creatures or people pictured with their eyes closed! I also don’t like buildings that are meant to be homes without having curtains hanging in the windows. Like closed eyes, I have to draw them in. Using my Early Espresso Stampin’ Write Marker I drew the curtains in the two largest houses and coloured them with my Pool Party Marker so they blended in well with the walls!

I toyed with the idea of adding curtains to the windows on either side of the front door but decided to give them a miss. The only other window that drew my attention was the round window on the second-largest house. On that window I took the easy option – I used the die from the Home Together Dies and die-cut a Christmas Wreath from a different sheet in the Trimming the Town DSP and adhered it using a Dimensional. I adhered the largest house using Tombow and Tombow again for the second house but I lowered the floor level to make it look as if that part of the house was jutting out further than the first house. I added the third house – which I see as the entrance lobby – on the same level as the second house but popped it up on Dimensionals. 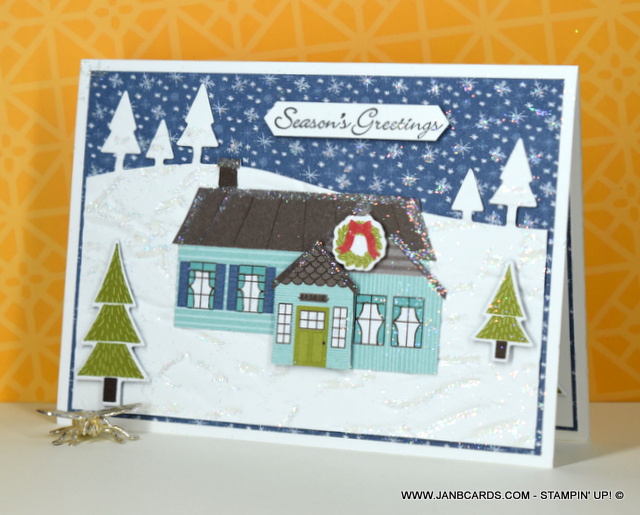 Next, I die-cut two large and two small fir trees from the DSP and adhered one of each on the front of the card popped up on Dimensionals. I adhered the top Whisper White Cardstock (CS) layer onto a middle layer of the blue snowflake design from the DSP and then adhered the layers on a Whisper White CS card base. Inside the card, I mirrored the top two layers like the front of the card but without embossing the top layer. I added the other two die-cut fir trees in the bottom right-hand corner. It hasn’t left a huge area for the greeting but extra can be written on the back of the card or inside on the back of the front of the card. 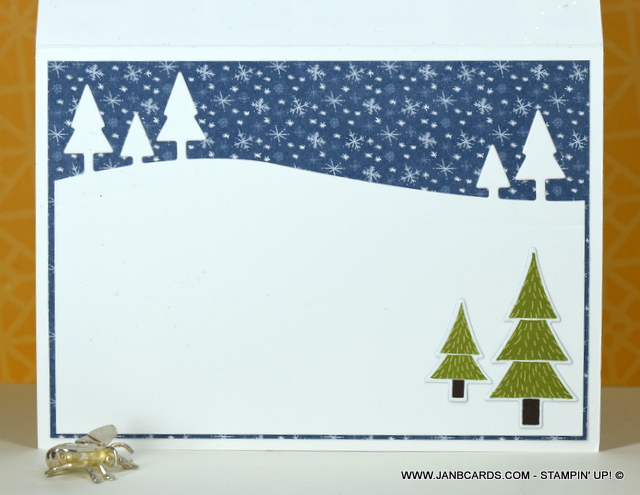 To finish off the front of the card, I went around with my glue pen and sprinkled (retired) Dazzling Diamonds all over it! By the way, After I had die-cut the three houses I decided to fussy cut the white edges off! I’m really happy how this card turned out and I’d like to say many thanks to Terri Walker for the inspiration for today’s card.

That’s it from me today. I look forward to being back with you tomorrow, and in the meantime please take care and stay safe. Happy crafting.