What a difference a day makes? Yesterday, the Hostess Code order I placed on 31st December 2020 for my December online customers’ thank you gifts finally arrived! The delay was a knock-on effect of Brexit.  I’m feeling so much more relaxed now I’m ready to face the world again! 😀 I decided I wanted to make a fun card for today and chose the fabulous Darling Donkeys Stamp Set. This is available as a gift from the Sale-a-bration brochure for a qualifying order until 28th February 2021. 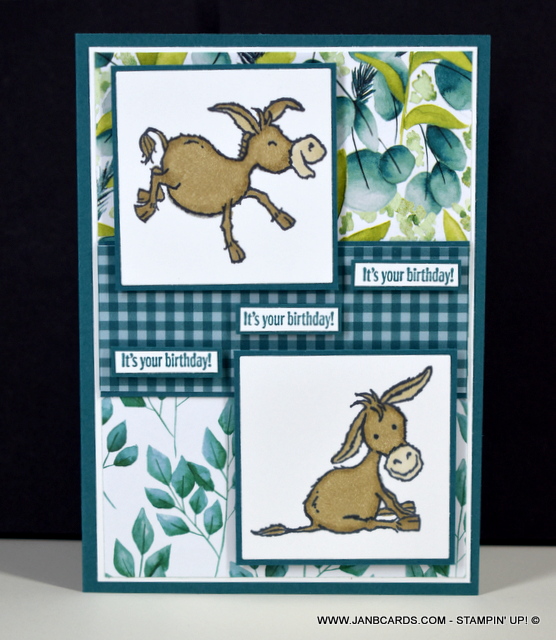 I started by stamping and colouring all three donkey’s on a large piece of Whisper White Cardstock (CS) using Light and Dark Crumb Cake Stampin’ Blends. After that I didn’t know what direction to go in so I pulled out my folder of sketches. I picked one out which had sizes for the different elements but it was aimed at the North American market. I couldn’t translate the sizings to suit A4 cardstock and gave up on the sketch idea and went my own way, changing direction several times before I finished up with today’s card! 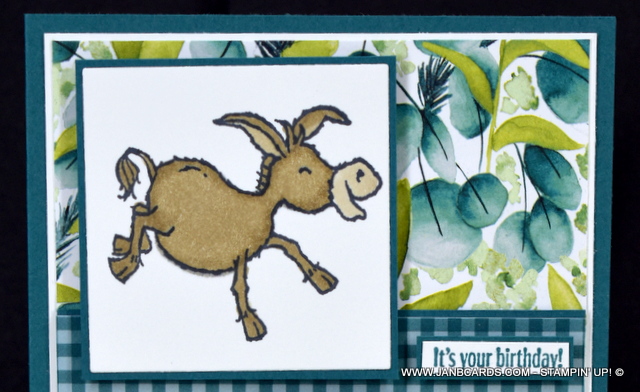 I had several sheets of Designer Series Paper (DSP) on my desk to choose from. Some were from the 2019 – 2021 InColours 6″ x6″ DSP pack and the others were from the Forever Greenery DSP. I adhered two leaf designs on to a middle layer of Whisper White CS; the top was about a third of the height and the bottom was about two thirds of the height. I used the number 6 straight cut die from the Layering Squares Dies to cut out the kicking donkey and adhered the image onto a piece of Pretty Peacock CS which was one eighth of an inch bigger on two sides. 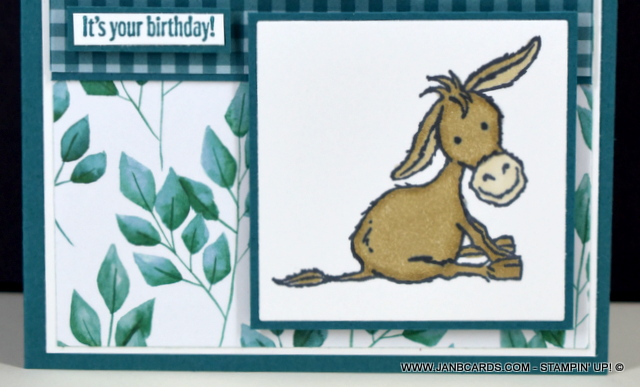 That idea wasn’t  working out so I added a strip of the InColours gingham design across the centre. This broke up the two leafy patterns beautifully. I decided to die-cut the seated donkey using the same square die as before. At this stage I could see my design beginning to take shape! I needed a sentiment and the HAPPY BIRTHDAY in the stamp set is so very small that I decided to take a thin strip of Whisper White CS and stamp the image on it three times. I used my Stamparatus because it allows me an opportunity to get my stamp straight before stamping onto cardstock!

Unfortunately I misjudged the space between the three sentiments! I decided to adhere the white strip onto a strip of Pretty Peacock CS that was an eighth of an inch wider and then trimmed the ends so each sentiment was more or less the same length. I toyed with the idea of adding one sentiment to each image and the third one on the centre strip of DSP. I was uncertain if this would work and I decided to adhere the two images in position because it would be easier for me to see what it would like. As soon as I started playing with different arrangements I saw that the sentiment was the same length as the length the two images overlap – see the middle sentiment! 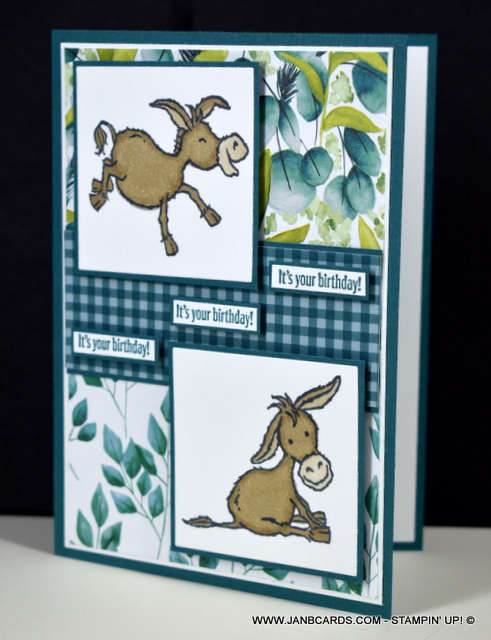 Once that was in place I adhered the other two so they lined up with the bottom edge of the top image and the top edge of the lower image. I couldn’t have planned it to work out like that! All that was left to do as the inside of the card and I couldn’t decide what to do. I decided to add a Whisper White CS middle layer and left it at that. If I think of something I’d like to use to decorate the inside I can always go back to it! 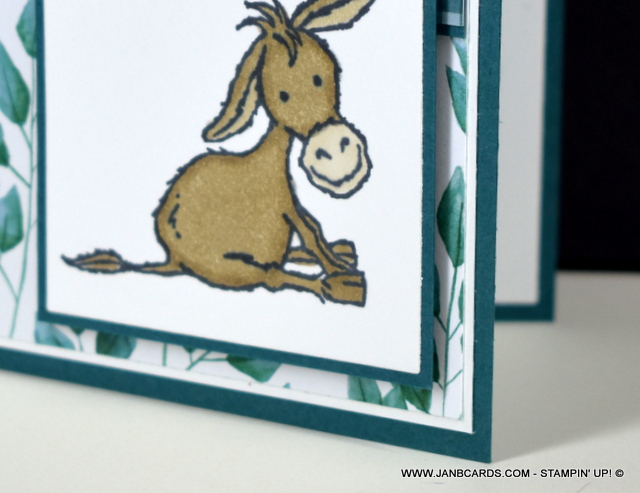 I’m hoping my Hostess Code order for my January online customers’ thank you gifts will arrive today. It’s scheduled to be delivered on Monday, but the order that arrived yesterday had arrived a day before it was scheduled to arrive!! Here’s hoping!! That’s it from me today and I look forward to being back with you tomorrow. In the meantime, please take care and stay safe. Happy crafting.

Products used for this project: please click on any of the links to be taken to my 24/7 online Stampin’ Up! shop. The Hostess Code for FEBRUARY 2021 is P2XAJ6Z6 Thank you. xx