Today’s card has been based on an idea that was very popular a few years ago but I’ve added my spin so it has concealed part of what was the original idea! Normally this design wouldn’t have the daisy in the centre of the four squares. All four squares have two diagonally opposite rounded corners and the other two corners are square cut. Even without the daisy in the centre, the four squares look like a flower in its own right. 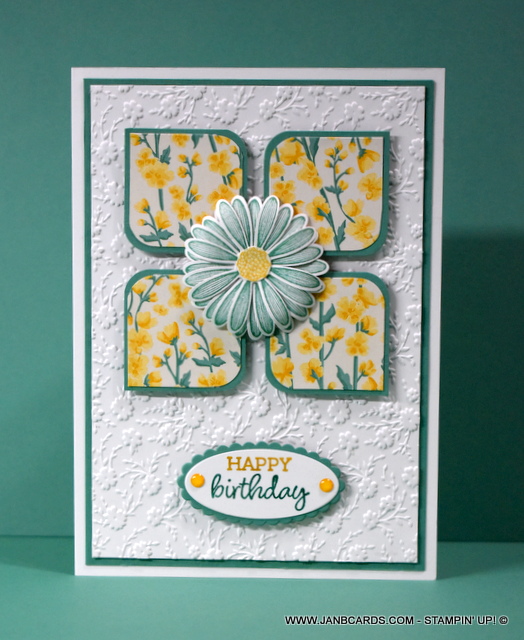 All the rounded corners paired up with each other in the middle of each outside edge. With all the straight cut corners four meet in the centre and the other four are on the outer most corners. I cut the Just Jade Cardstock (CS) squares at 1 3/8″ each and the Flowers for Every Season Designer Series Paper (DSP) were cut to 1 1/4″ square. I used the retired Project Life Corner Rounder Punch instead of our trio punch because I’m having trouble with my right wrist and I thought the smaller punch would be less of a challenge for me. (I think I have RSI – repetitive strain injury – so I’m trying not to use my right wrist more than necessary. For example, I’ve switched my mouse round so I can use it with my left hand; right click is now left click and vice versa!) 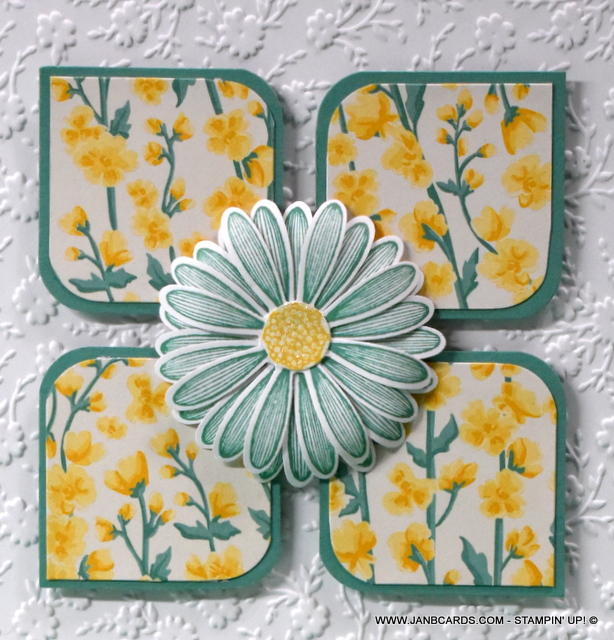 I used Just Jade to stamp four small daisies from the Daisy Lane Stamp Set – I needed three but I did one extra in case I mis-punched one of them! All four were punched out beautifully so I used all four! After I had gently curled all the petals down, I adhered them all together. I also stamped one daisy in Bumblebee Ink and punched the centre out using a 3/8″ circle punch! I adhered it in the centre of the daisy and painted it with my Clear Wink of Stella Glitter Pen. 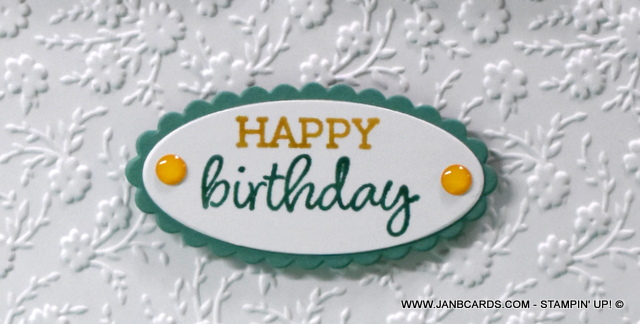 I used the HAPPY BIRTHDAY sentiment from the Oval Occasions Stamp Set. To achieve the two colour stamped image I set the stamp on my Stamparatus and painted HAPPY using my Bumblebee Stampin’ Write Marker Pen and then I painted BIRTHDAY using my Just Jade Marker Pen. After I had stamped once, I painted the words again and stamped a second time. I was pleased with how dark it looked. I die-cut the sentiment using the no 1 straight cut die from the Layering Ovals Dies and then I die-cut a Just Jade CS layer using the no 1 scallop die from the same set. 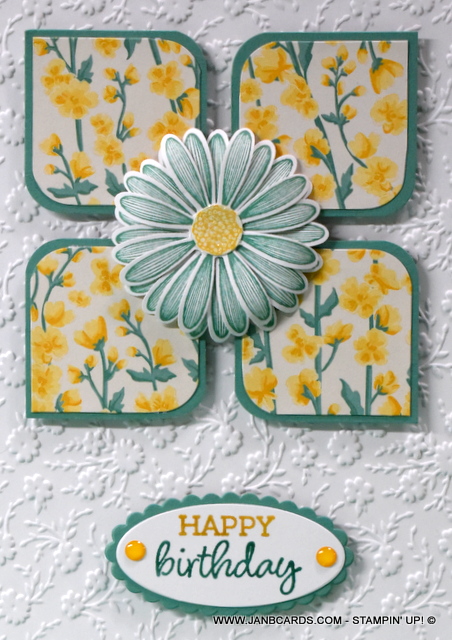 Then I was ready to start building my card. I took an embossed top layer of Whisper White CS from my box of top layers. This layer had been embossed with the Ornate Floral 3D Embossing Folder for another project but not used. I adhered the top layer on to a middle layer of Just Jade CS and then onto a Whisper White CS card base. I popped the four squares up on Dimensionals and I put the daisy on a double layer of Mini Dimensionals which I adhered to the card front in between the four squares. Then I added the sentiment popped up on more Dimensionals and added a Bumblebee 2020 – 2022 In-Colour Enamel Dot at each end. 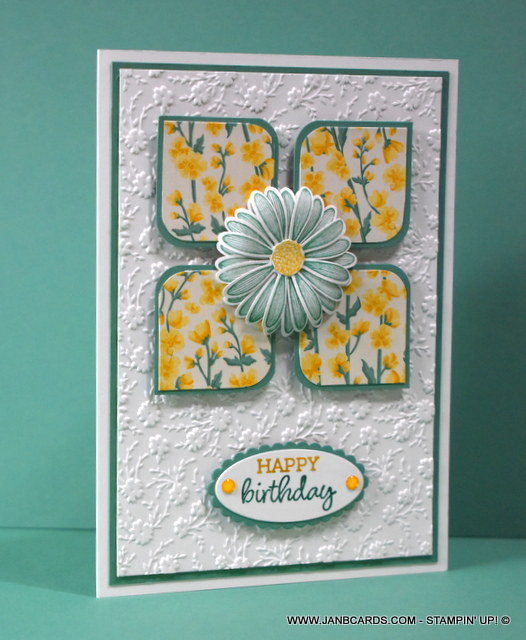 To decorate the inside of my card I thought of adding another small daisy in the bottom right-hand corner, taking it over the edge if I thought a whole daisy was too much. But I was distracted because I saw on our local neighbourhood app that an 11 year old boy had disappeared! Hubby and I were trying to find out more details when it suddenly came up on the screen that he had been found alive and well! Praise the Lord! By this time I’d forgotten about the inside of my card and was tidying up when I eventually remembered but I decided to let it go! In the scheme of things it wasn’t very important!

That’s about it from me today. I hope you have a wonderful weekend. Take care and stay safe. Happy crafting.

Products used for this project: please click on any of the links to be taken to my 24/7 online Stampin’ Up! shop. The Hostess Code for MARCH 2021 is R329BMNW Thank you. xx