Last week, a Canadian demonstrator friend, tagged me in a video ad she saw on Facebook because she recognised that the company were using 3-4 seconds of one of my videos! On my behalf, she reported it to Facebook and once I had worked out how, I reported the company to Facebook for copyright infringement! Facebook responded immediately and within twenty-four hours, they took the ad down! 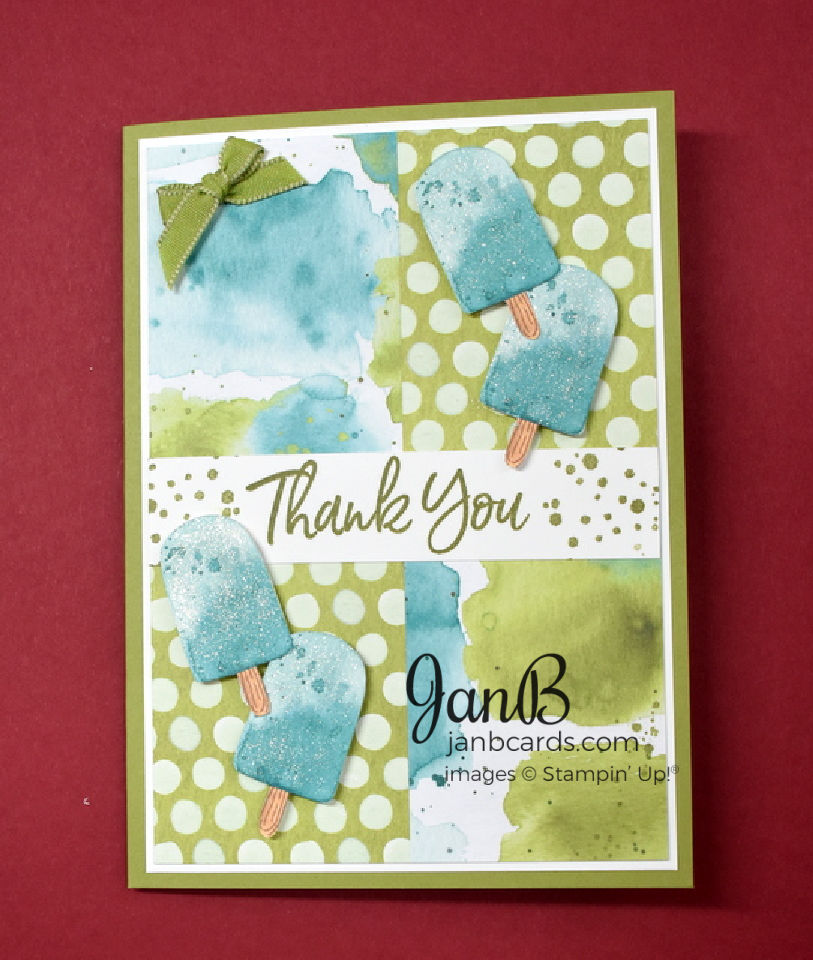 Kudos to Facebook and also huge thanks to my friend for drawing my attention to it in the first place and for her support in getting it sorted out. The company were advertising a die that cuts a fancy fold card that my video shows how to make by hand. They had the cheek to use my video as if I had used a die to create the card! Never a dull moment! 😀 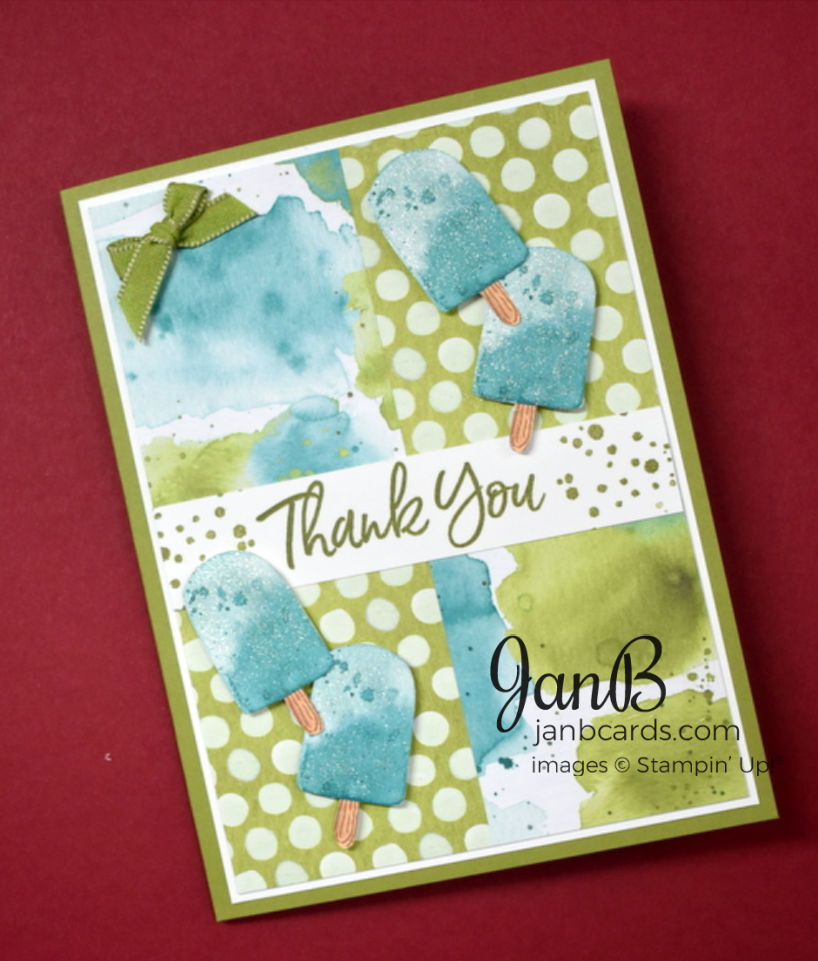 I have three cards to share with you today! They are all basically the same card but using different designs from the Ice Cream Corner Designer Series Paper (DSP). Each card features both sides of three different DSP sheets where both sides co-ordinate with each other beautifully. I decided to use more scraps by fussy cutting various ice lollies and ice cream cornets in matching colours. 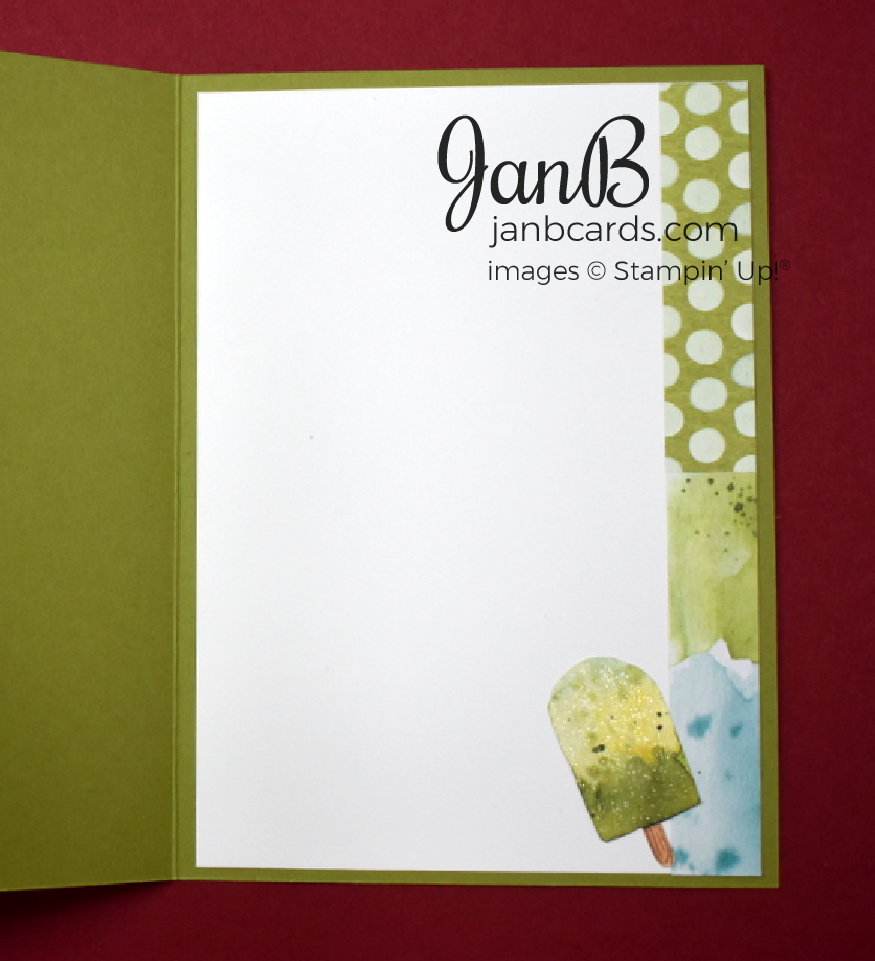 The first card I created was the Olive Green and Bermuda Bay card. When I was looking for which ice cream I liked the for this colour combo I decided the Bermuda Bay ice lollies looked best. I also cut out the yellow/green ice lolly which didn’t go so well so I adhered it inside the card instead. The inside of each of the three cards is slightly different but all have a strip of DSP and an ice cream or lolly! 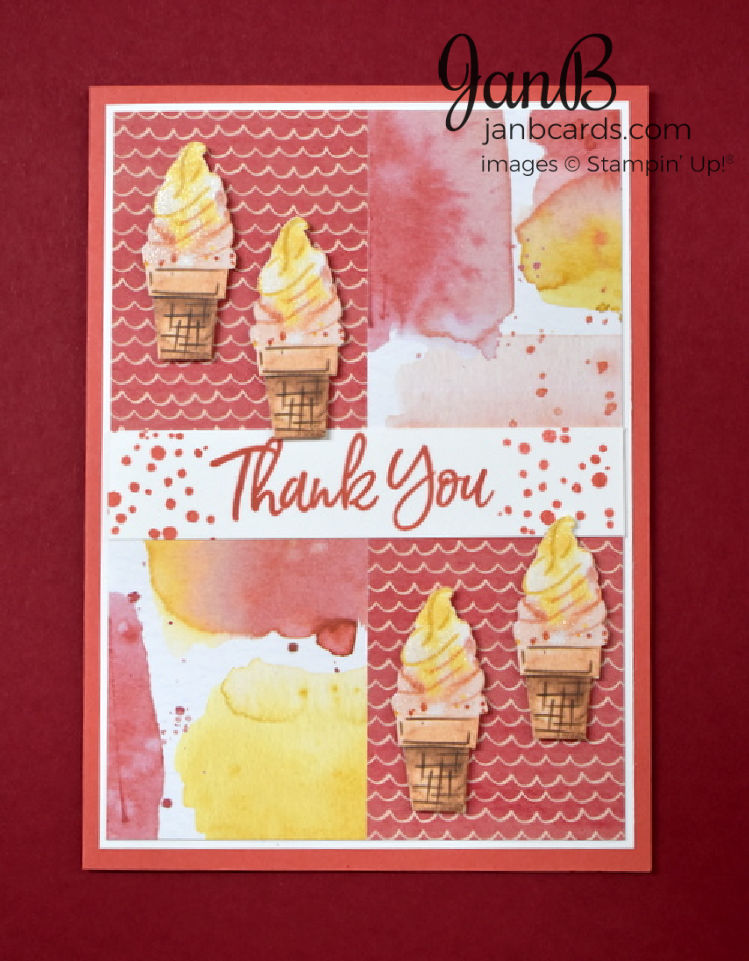 For the inside of the Olive Green card I cut the half inch strip of DSP the same length of a middle layer, cut it in half and adhered both designs on the middle Basic White Cardstock (CS) layer on the right-hand side. Not to waste the yellow/green ice lolly I also adhered that on the bottom right-hand side. If fussy cutting isn’t your scene, you can use the stamp set and Ice Cream Builder Punch. 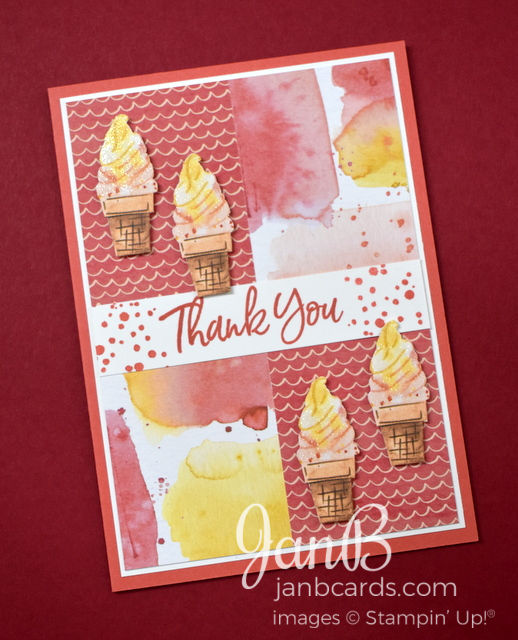 I used the same THANK YOU sentiment from the Sweet Ice Cream Stamp Set for all three cards using the same colour ink as the card base. I also used the circle sprinkles stamp on each side of the sentiment. Using Dimensionals, on the Old Olive card, I adhered two ice lollies, one overlapping the other, in the two spotted corners. I painted all the lollies, inside and out, using my Clear Wink of Stella Glitter Pen. 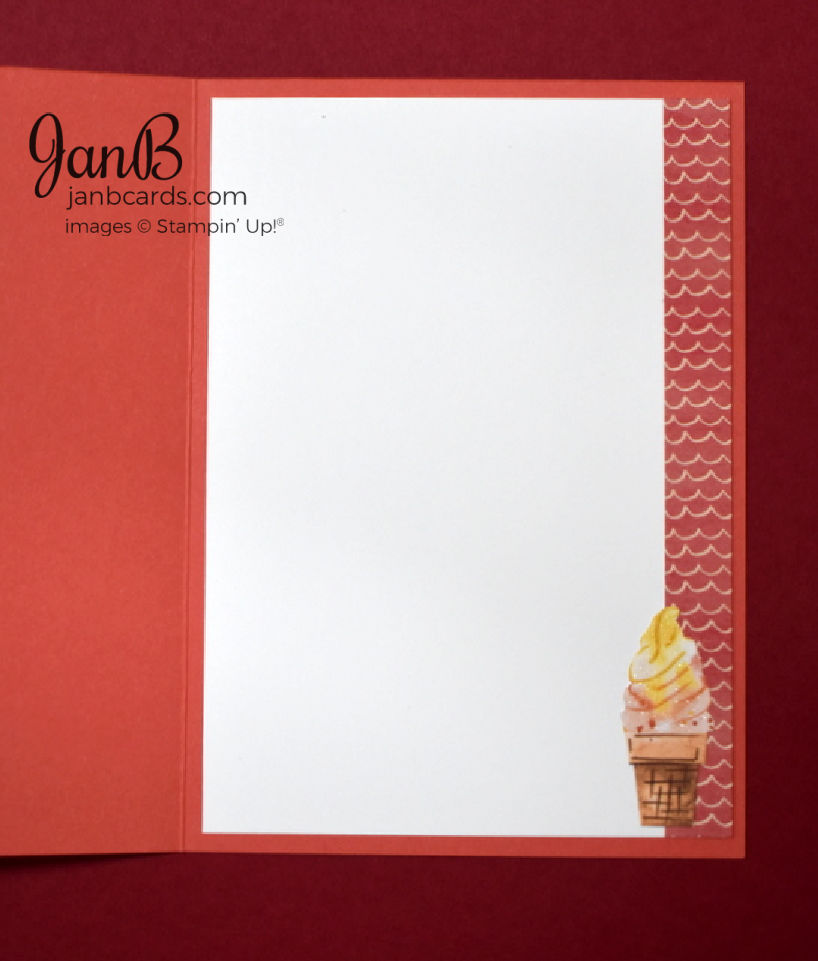 To cut the squares, I first cut a top layer of my chosen DSP design and cut it in half vertically, i.e. 1 7/8” (NA 2”) and then horizontally at 2¾” (NA 2 5/8”). To make life easy, and not to use my cardstock unnecessarily I cut three top layers using a thicker than normal computer paper to adhere my four panels on. 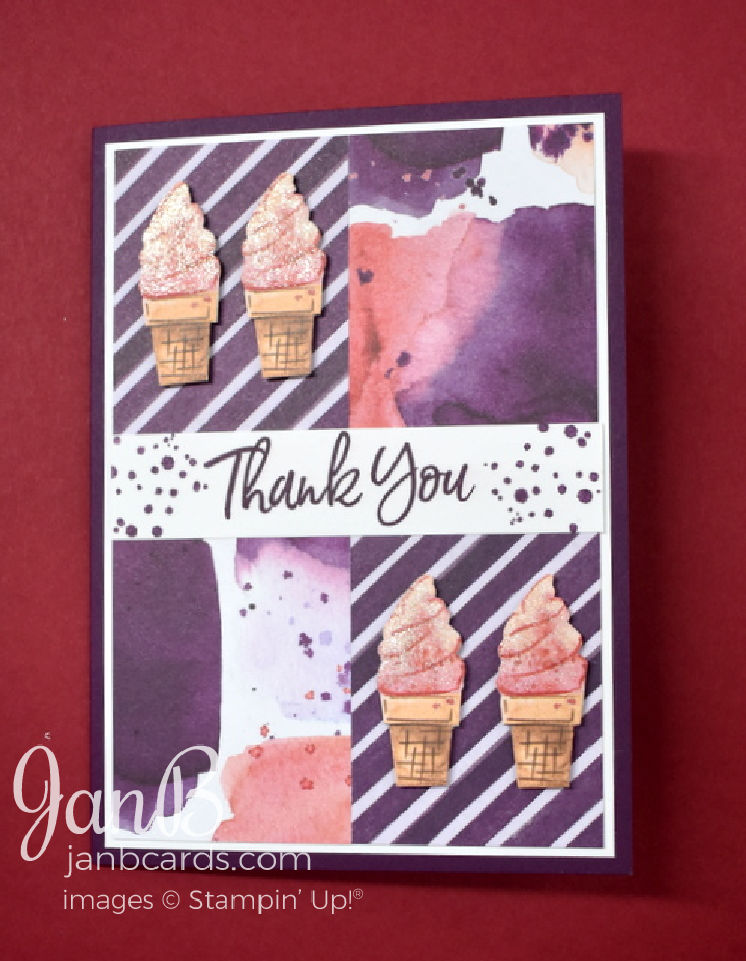 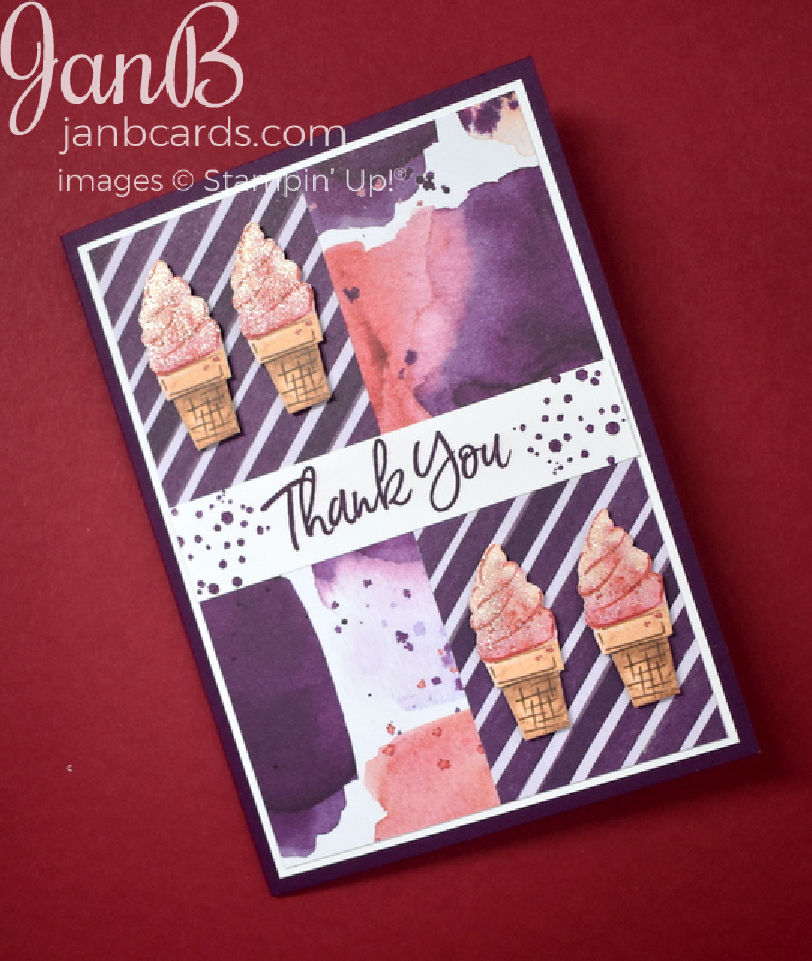 Once the panel top layers were ready, I adhered them onto a middle layer of Basic White CS and then onto a card base – the third colour is Terracotta Tile. I found a ready-made Old Olive bow in the bow dish I keep on my table, so I adhered it in the top corner of the Old Olive card. The Terracotta Tile and Blackberry Bliss cards both have a strip of DSP inside, one on the left and one on the right. They both have an ice cream in the bottom right-hand corner. Like the Old Olive card, the Blackberry Bliss card also has a different image inside the card! 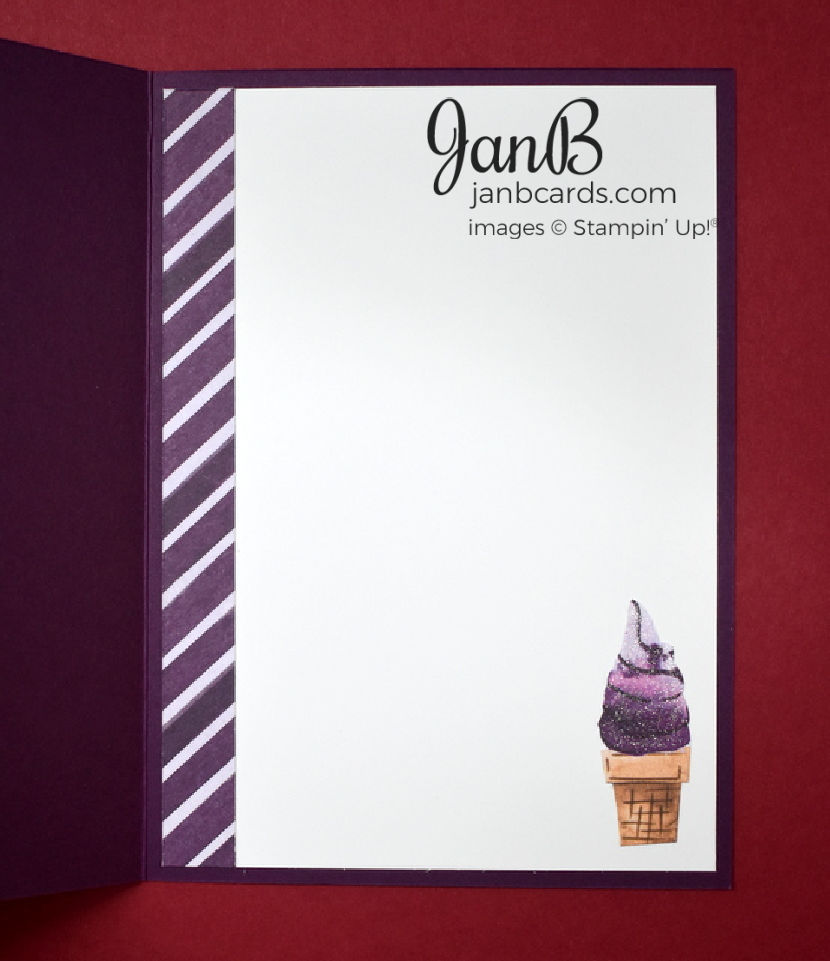 Finally, I have achieved one of the new techie things I was dreading! As you can see on my photographs, I now have proper watermarks. My IT guru tried teaching me how to do it but I just couldn’t get to grips with it! I had to bite the bullet and pay for Picmonkey which, with hubby’s help, I’ve mastered! I’m not happy with the quality of today’s photographs but I think I know what I need to correct that! Next time! That’s it from me today. Until next time, take care, stay safe an happy crafting!

Products used for this project: please click on any of the links to be taken to my 24/7 online Stampin’ Up! shop. The Hostess Code for APRIL 2021 is 3MZTFE63 Thank you. xx