Here in the UK we have enjoyed a three-day mini heatwave, totally unexpected but very welcome none-the-less!

Two of the many aspects I like about Stampin’ Up! stamp sets are two-step stamping stamp sets and infill stamps that create shading! The Sale-a-bration (SAB) stamp set called Delicate Dahlias is a brilliant example. I started by stamping the outline stamp using Night of Navy Ink. My mind was so focussed elsewhere – I have no idea where! – that I didn’t think to check how the stamp lined up! It’s easy enough to do by just looking at the images on the box! Stampin’ Up! really couldn’t make it any easier. As I say, I didn’t think about it at the time! 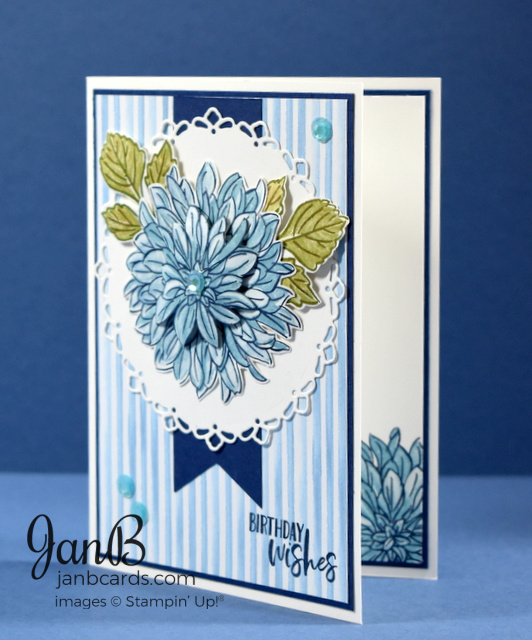 After I had stamped the outline image, it was very easy to line the infill stamp up by laying it on the stamped image. I took a permanent marker and marked the petal at the top of my image and marked the corresponding point on the infill stamp! My top point is actually south-east on the SU dahlia! LOL! But I really don’t think it matters; to me it’s a beautiful image whichever way it’s facing. This stamp set would definitely have benefitted from a set of matching dies! As you know, I enjoy fussy cutting because I find it relaxing; normally that is! After I had stamped two dahlias using Balmy Blue Ink for the infill, I stamped four sets of leaves using Mossy Meadow Ink for the outline and Pear Pizzazz for the infill. I didn’t have any particular design in mind for my card, so I decided to fussy cut the two flowers and the four sets of leaves. 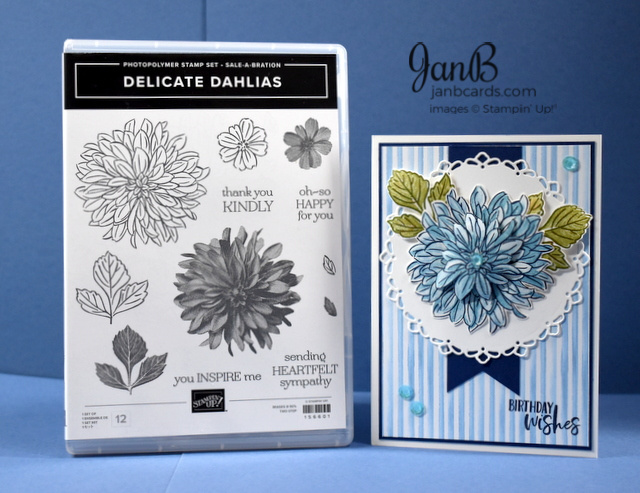 I struggled with the first dahlia and made a real hash of it! Rather than waste that flower, I stopped and started fussy cutting the second one. This time, I cut around one petal at a time and when my scissors reached the top I cut the waste paper off rather carrying on cutting. Then I went back to cutting by going down the petal and back up the other side, and cut off the waste piece again. I did this all around the dahlia and found I achieved a much better result. While I was working on the second dahlia, I decided I’d go back to the first image and cut out just the centre without leaving the small white edging I was carefully leaving on my large dahlia. 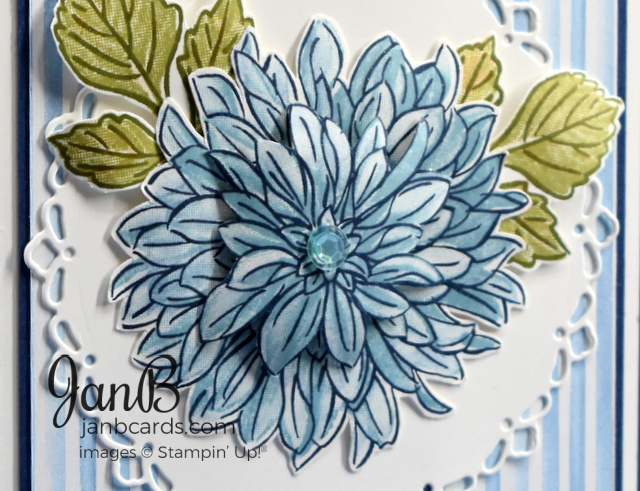 I chose one of the “doily” dies in the Encircled in Beauty Dies which match the Encircled in Friendship Stamp Set. If you saw last Sunday’s video, this is the die set I used for the doily on the Cinnamon Cider video card. It’s a fabulous set of dies. I was planning to use some Balmy Blue Designer Series Paper (DSP) from the Subtle 6″ x 6″ DSP Pack but thought I’d check the other DSP I have to see if I had anything else in Balmy Blue. I’m glad I did because the You’re a Peach DSP has two sheets that are completely blue and a third one that’s blue, Pear Pizzazz and white. 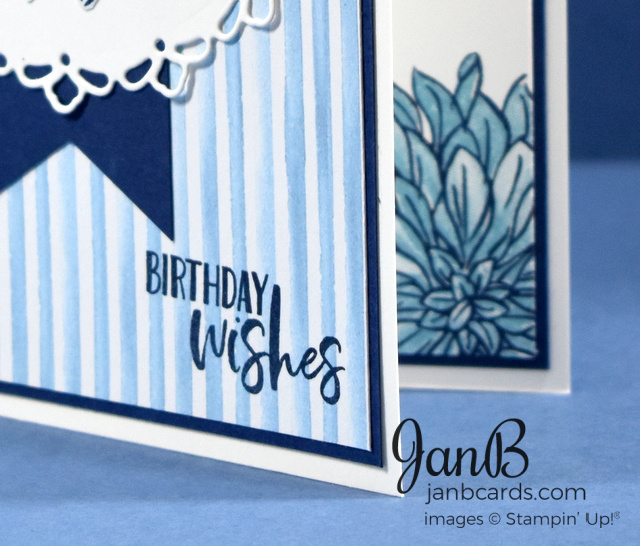 After I had curled both dahlias and all the leaves downwards using my Bone Folder, I glued the large dahlia onto the doily by putting a small amount of Tombow under the centre of the flower. Next I added two larger Dimensionals one on top of the other and then put then in the centre of the back of the small dahlia and adhered it in the centre of the larger one. I added one Mini Dimensional near the base of each leaf on two sets of leaves. It was necessary to get my Take Tour Pick Tool to lift up some petals to slide the leaves in underneath them. The petals were tight against the doily because I had curled them downwards. 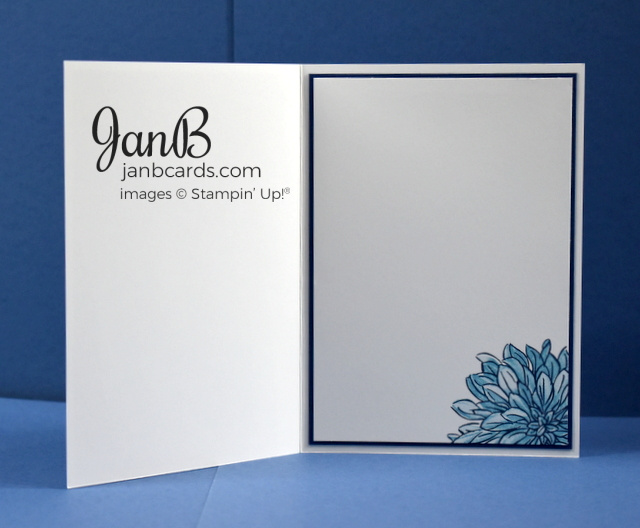 I started putting my card together with a Basic White Cardstock (CS) card base, then a middle layer of Night of Navy CS and a top layer of You’re  a Peach DSP on the front of the card. For the top layer inside the card, I took a Basic White CS layer and stamped another dahlia to coming off the bottom right-hand corner. I chose the BIRTHDAY WISHES sentiment from the Garden Birdhouse Stamp Set. Using Night of Navy Ink I stamped it directly onto the DSP in the bottom right-hand corner. 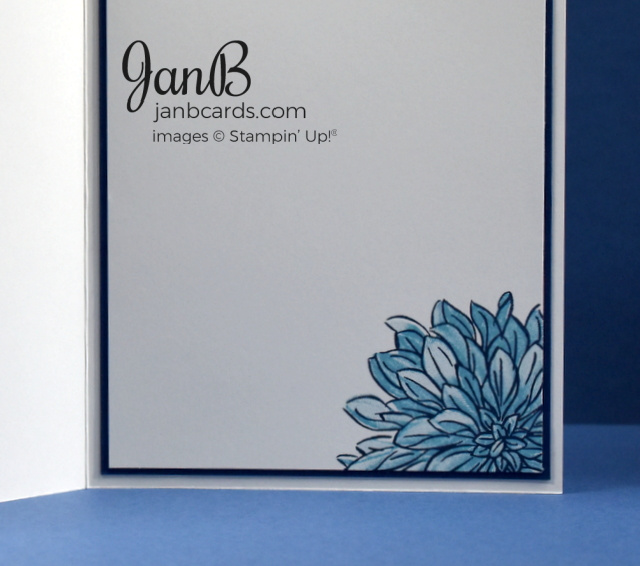 Before I adhered the doily to the front of my card, I adhered a 1.25″ wide x 4.5″ Night o Navy CS banner, which I had fish-tailed the end, in the centre of my card. To finish off my card I painted the dahlias and leaves using my Wink of Stella Clear Glitter Pen. I also added three 6 mm Coastal Cabana Artistry Blooms Adhesive-Backed Sequins (152477) on the striped DSP and one in the centre of the flower. Then I added a 4mm sequin inside the larger ones.

This is a great stamp set which I wished I’d started playing with sooner. As it’s a SAB stamp set, it will only be available until 30th September 2021. If you want your own set, please don’t leave it too late! That’s it from me today. I look forward to being back with you soon. In the meantime, take care and stay safe. Happy crafting.