A little while ago I was requested to make a video featuring a 3D project rather than a card. For those of you who have been with me for quite a long time may remember when I used to make 3D projects quite regularly. Looking back, I don’t know how or why I ended up always making cards but the question now is, would you like to see more 3D projects? I’m not suggesting only 3D but a mixture of both. Please let me know how you feel. 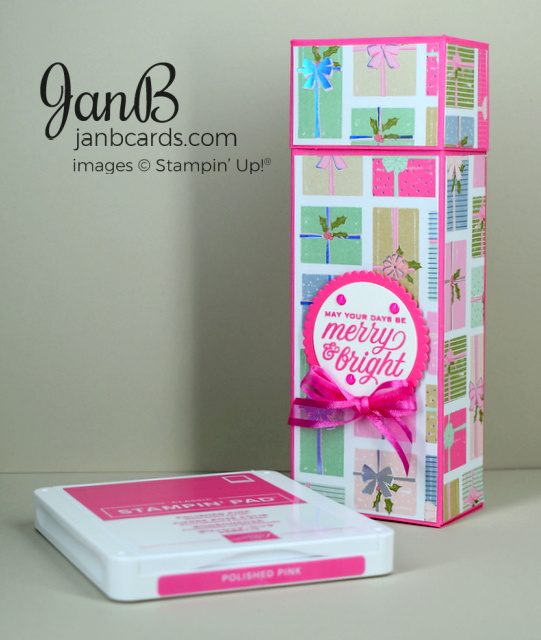 I chose to make an Impossible Box for today’s project because I have wanted to make one since I received one as a swap at the last in-person Stampin’ Up! OnStage event we went to which was in Dortmund in Germany in November 2019! These boxes are not a new idea by a long chalk which I found out when I searched for Impossible Box videos on YouTube. The Stampin’ Up! demonstrator I chose to watch was Julie DiMatteo AKA the Paper Pixie. This is the link for her YouTube channel – it’s well worth a visit: The Paper Pixie – YouTube 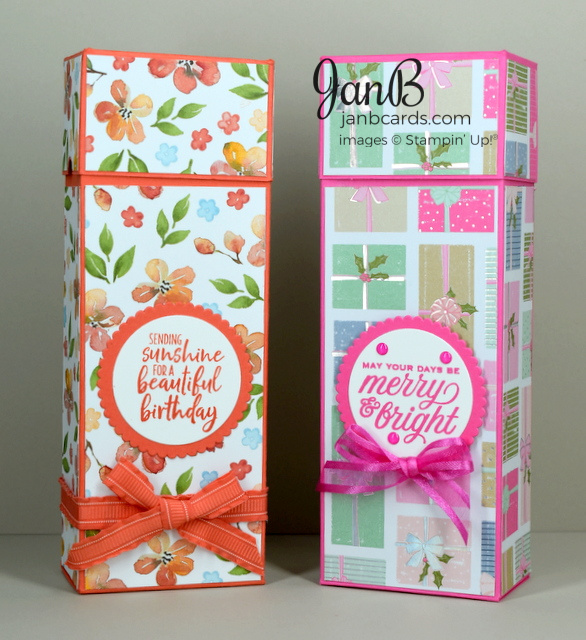 There are several videos on Julie’s channel featuring different sizes, shapes plus a double impossible box, i.e. an opening at both ends of the box! By the time I was ready to start videoing I had made five boxes – two doubles and three singles! For my video box I worked out the measurements to make the largest box possible – using one sheet of cardstock – that suited A4 and letter-sized cardstock. The finished box size is approximately 6¾” x 2⅜” x 1½”  which is a decent size for sweets and chocolates as well as gifts that don’t come in a box of their own. 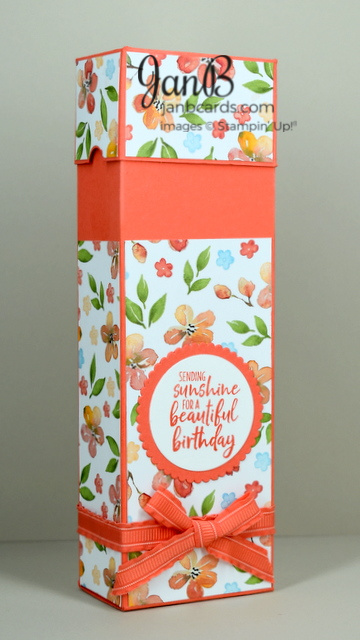 The following is a list of the products I used to make the non-video boxes. The Polished Pink Cardstock (CS) box is the video box and all products used are listed below my signature as well as in the box below the video. I have written about all the other boxes starting with the “before the vide” box and working my way back to the very first box. 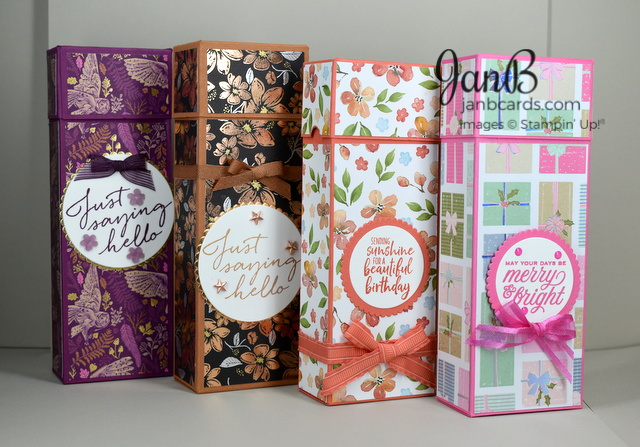 The box I made just before the video is the Calypso Coral CS and You’re a Peach Designer Series Paper (DSP) box. The Ruffled Calypso Coral Ribbon is a product that retired years ago! I stamped the SENDING SUNSHINE FOR A BEAUTIFUL BIRTHDAY sentiment using Calypso Coral Ink on a scrap of Basic White CS. It’s from the stamp set called Welcoming Window. I used the no 3 straight cut and no 4 scallop circle dies from the Layering Circle Dies to die-cut the sentiment and the layer. 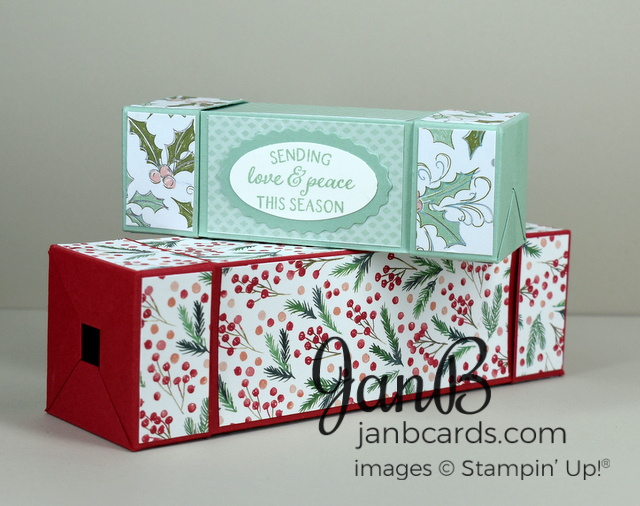 The box I made before this one was the double Real Red CS which I didn’t get round to finishing off. This was an experiment because I found the small double box difficult to open and I wondered if a bigger box would be easier. Apart from not allowing a bit extra for the top panels to close properly, it worked out well but I decided, as much as I loved the idea of the double, it was more of a struggle trying to open two lids at the same time. It’s probably my fingernails that caused the problem but I decided to stick to a single lid and I’m really pleased with all four that I’ve made. The DSP I used for this box is called Painted Christmas. 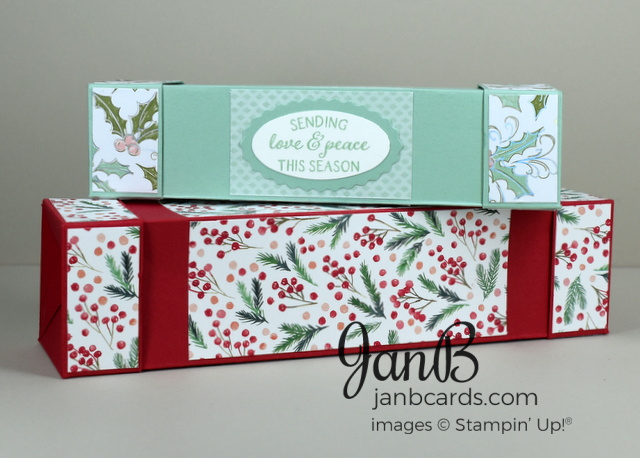 The box before that was the Rich Razzleberry box which featured the Blackberry Beauty DSP – what a fabulous pack of designs this is!! The JUST SAYING HELLO sentiment is from Tasteful Touches Stamp Set. The sentiment was stamped using Rich Razzleberry Ink and die-cut using the no 6 straight cut die and layered onto a Gold Foil circle die-cut using the no 6 scallop circle die; both dies are from the Layering Circle Dies. The ribbon is the retired Blackberry Bliss Striped Ribbon and the flowers are also retired. 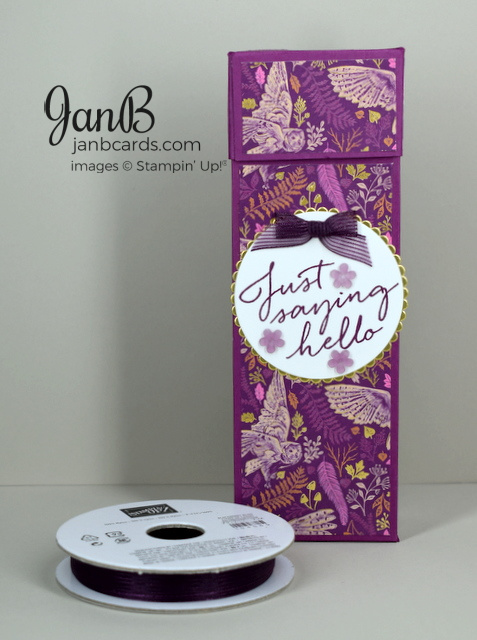 The box before the Rich Razzleberry was the Cinnamon Cider CS box and I used the same Simply Elegant DSP that Julie had used but she had put hers with Basic Grey CS. I did the sentiment the same way as the Rich Razzleberry box but I used the retired Delicata Copper Ink that we had in one Christmas catalogue. It would be great to have that ink back in all three colours, i.e. with Gold and Silver as well! The Copper stars are also retired. The ribbon was available when the 2020 – 2022 were launched. The sizes of these last two boxes (I think) were Julie’s sizes because they almost fitted a complete letter-size sheet of CS. 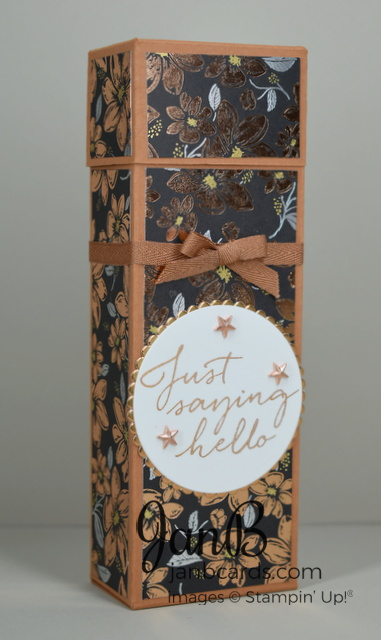 So that just leaves the first box which was the small Mint Macaroon double box. I love this idea but I just struggled to open the box. As I said earlier I think it’s my nails that cause the problem. The first time I ever had my nails done I was told I must not use them as “tools” and eventually it became a way of life! Does anyone else have this problem? LOL! The DSP I used for this box is Whimsy & Wonder but I cannot remember where the sentiment is from! I know it was stamped in Mint Macaroon and I know I punched the shapes out using the Double Oval Punch! Unfortunately, I filed the stamp set away when I was preparing to video! Grr!!

That’s about it from me today. I hope you enjoy seeing a video that’s a bit different! I hope you have a very blessed Sunday. Please take care and stay safe.  Happy crafting.

Fold cardstock over at 2nd score line where there three score lines close together – make sure you fold so that the mountain fold is folded inside. Burnish on fold line.

Place fold against top of score board with the ½” (1.3cm) score line is on the right-hand side

PRODUCTS USED for this project: please click on any of the links to be taken to my 24/7 online Stampin’ Up! shop. The Hostess Code for DECEMBER 2021 is GPYZHUB7 Thank you. xx